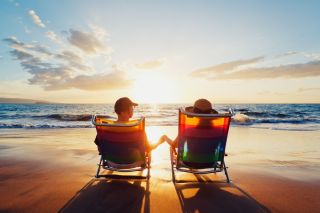 It filled people with hope when Punxsutawney Phil's shadow failed to scare off the groundhog on Feb. 2. But two weeks later, much of the country is still immersed in the bitter chill of winter. Americans remain huddled indoors among piles of cozy blankets, waiting for the sunshine and warm weather to roll on in. And while people wait, their bodies may be becoming deficient in one very important vitamin, one of the few vitamins that isn't easily available in our food.

Vitamin D is known as the sunshine vitamin because human bodies convert the sun’s rays into a usable form of the nutrient. Because vitamin D is so hard to get from food, sunshine is a crucial source. But think about how much time you spend in the sun — not how much time you want to spend in the sun, but the amount of time that you’re actually basking in its rays. And remember that sunblock is mighty effective at defending against the sun’s rays. So if you’re covered from head to toe in the stuff, your body can't produce much vitamin D.

Why is this vitamin important? It helps the body absorb calcium from food and supplements, and calcium builds healthy bone. The vitamin also plays an important role in sending messages between the brain and every body part. It strengthens the immune system, too. What's more, lots of research suggests that vitamin D may help prevent certain diseases. More studies must be done, but there is promising evidence that supports the practice of taking a daily vitamin D supplement.

Among the diseases, this vitamin may protect against:

Healthy Bites appears on MyHealthNewsDaily on Wednesdays. Deborah Herlax Enos is a certified nutritionist and a health coach and weight loss expert in the Seattle area with more than 20 years of experience. Read more tips on her blog Health in a Hurry!