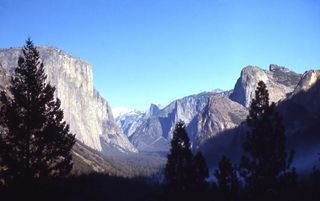 A third person has died from a hantavirus infection contracted while staying at Yosemite National Park, according to park officials. The rare, rodent-borne disease causes early symptoms similar to the flu, and can be deadly as the lung infection progresses.

Eight people have now become sick from hantavirus pulmonary syndrome and the remaining five are either improving or recovering from the disease, according to officials. The confirmed cases occurred in six people from California, one from Pennsylvania, and one from West Virginia.

"We continue to work closely with state and national public health officials, and we urge visitors who may have been exposed to hantavirus to seek medical attention at the first sign of symptoms," Yosemite Superintendent Don Neubacher said in a statement.

Officials have traced seven of the cases to the "signature tent cabins" in the park's Curry Village.Those cabins have been closed, and the park has reached out to people who stayed in them overnight since June 10, who may have been exposed.

One person is believed to have become sick after staying in the High Sierra Camp, in a different area of the park, according to an L.A. Times report.

The virus kills 38 percent of infected people, filling its victims' lungs with fluid and essentially drowning them, according to information from the Centers for Disease Control and Prevention (CDC).

The virus cannot be spread from person to person; people generally become infected by inhaling airborne particles of contaminated rodent droppings or urine.

Symptoms of infection include fatigue, fever, chills and muscle aches, all of which can develop up to five weeks after exposure, the CDC says. The disease worsens quickly and spreads to the lungs. Four to 10 days after the first signs, a person may develop coughing, shortness of breath and severe difficulty breathing.

Receiving early medical attention greatly increases the chance of survival. Treatments for hantavirus oxygen therapy and breathing machines, according to the National Institutes of Health.

Pass it on: Three people have now died from hantavirus infections contracted at Yosemite National Park.