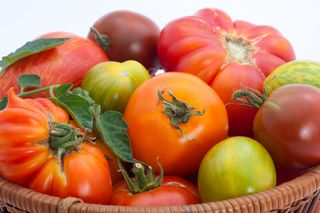 Organic tomatoes aren't sprayed with chemical pesticides. For me, that's a major reason to buy organic, but it's not the only reason.

Have you noticed that the tomatoes you find at the farmer's market look very different from the ones in the grocery store? I mean, it's not like apples-and-oranges different, but you can definitely tell the two apart. That's because most commercially grown tomatoes have an inactivated gene that gives them a more uniform appearance.

As it turns out, that missing gene is also the reason why most commercially-grown tomatoes aren't as flavorful, according to a study published in June in the journal Science. The mutation stops the fruit from producing the sugars and aromas that are associated with natural tomatoes.

So basically, we're sacrificing a sweet flavor and succulent aroma for… a little vanity? I don't know about you, but I'd rather eat an ugly tomato that tastes good, than a pretty yet bland fruit.

With this gene finding in mind, I wasn't surprised to learn that a study published in March from University of Barcelona researchers found that organic tomatoes contain more antioxidants than the conventionally grown variety. The researchers said the antioxidant boost may be due to the difference between the fertilizers used in organic and conventional farming.

Whether genetics or fertilizers are at work, both studies point to the fact that tomatoes are better for us when they're grown as nature intended.

This may not seem like news, but these studies are among just a few that have compared nutritional value and genetic makeup of organic and conventionally grown produce. So, if you've always had the suspicion that organic food packs more of a nutritional punch, you may be right.

So now that we have yet another reason to buy organic, let's start thinking about some juicy summer recipes for all those farmer's market tomatoes. Here are some of my favorites: