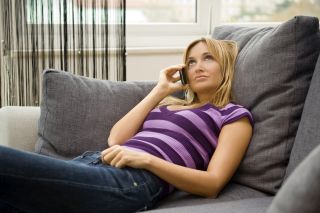 Depressed patients are more likely to stick with talk therapy if their sessions are conducted over the phone rather than in person, a new study suggests.

In the study, about 79 percent of people with depression who had talk therapy sessions over the phone completed the full 18 weeks of therapy, compared with about 67 percent of patients who met with their therapist in person, the researchers said.

People may be more likely to complete their therapy with over-the-phone sessions because they take less time, avoid transportation problems and are less expensive, according to the study.

The researchers said they hope the finding will encourage insurance providers to reimburse telephone therapy sessions, because many currently do not.

That finding underscores the importance of monitoring patients after they have completed therapy to make sure they receive additional care if their condition deteriorates, the researchers said.

Talk therapy, or psychotherapy, is an effective treatment for depression, and most patients prefer it to taking antidepressants. However, studies have found that as many as 30 to 50 percent of patients who use this type of therapy drop out before the treatment is completed.

In a new study, 325 patients with depression were randomly assigned to receive face-to-face psychotherapy, or telephone-administered psychotherapy.

The difference between the groups after six months, which was seen on tests designed to measure depression, may not actually mean there was a difference in patients' quality of life, the researchers said.

But it "raises the question whether some individuals are at risk of worsening after treatment with telephone therapy, compared to face-to-face," said study researcher David Mohr, a professor of preventive medicine at Northwestern University Feinberg School of Medicine in Chicago.

It could be that the presence of a physical therapist during treatments helps to maintain the therapy benefits over time, Mohr said.

"There may be a unique quality about the human contact that increases resilience and maintains the skills learned to manage depression after treatment has ended," Mohr said.

The study will be published tomorrow (June 6) in the Journal of the American Medical Association.

Pass it on:  Conducting talk therapy by phone is an effective way to prevent depressed patients from dropping out of treatment.