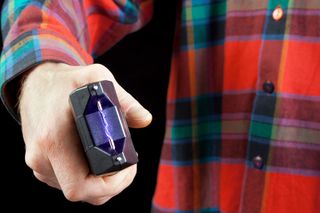 In rare cases, people have gone into cardiac arrest and died after being shocked in the chest with stun guns such as Tasers, and now researchers say they better understand why this happens.

Researchers looked at eight cases involving men and teen boys who lost consciousness after getting shocked by the TASER X26, a weapon widely used by law enforcement and the military.

In each case, the stun gun was applied to the chest, and the individuals experienced cardiac arrest after their hearts began to beat either too fast or abnormally.

Seven of the eight males died, while one survived with impaired memory.

“In no way am I saying that we shouldn’t use Taser weapons, but if you use it, be aware that cardiac arrest is a possibility,” said study author Dr. Douglas Zipes, a cardiologist at Indiana University School of Medicine in Indianapolis.

Stun-gun use can be risky

The handgun-shaped weapon shoots two barbed darts into a person’s skin or clothing. The darts are connected to wires that deliver 50,000 volts of electrical current for five seconds. The shock temporarily subdues the individual, causing them pain and muscle contractions.

“I think many law enforcement users are not aware of the possibility of cardiac arrest,” Zipes said.

In 2009, stun gun manufacturers advised users to avoid shooting the weapons at people's chests. But it doesn’t seem that the message has gotten out, Zipes noted.

The safety of stun guns has been questioned by advocacy groups such as Amnesty International, which reported more than 300 stun gun-related deaths in the U.S. between 2001 and 2008.

Zipes recommended that users pull the trigger a single time to avoid repeated or lasting shocks.

“That should be sufficient,” he said. “But that’s a judgment they have to make in the field.”

Cause of cardiac arrest still unclear

The eight cases that Zipes analyzed were under litigation, and involved healthy males who were shocked near or over the heart. All lost consciousness after receiving the shock.

The study adds to existing evidence, including studies in pigs, sheep and humans, which show that stun guns aimed at the chest may lead to cardiac arrest. But not all deaths following stun-gunshocks can be linked to electrical shock, Zipes noted.

Dr. Robert Myerburg, a cardiologist at the University of Miami who wasn’t involved with the study, said that while he doesn't disagree with the information reported in the study, he also isn’t entirely convinced that shocks to the chest are always the cause of cardiac arrest.

"Most, if not all of the incidents, were associated with stressful situations — that can also contribute to triggering cardiac arrest," Myerburg said.

Zipes suggested that stun-gun users avoid shooting at the chest, and monitor the person after they have been shocked. Stun-gun users should be prepared to resuscitate anyone who loses consciousness with an external defibrillator, he said.

The study was published in the May issue of the journal Circulation.

Pass it on: Stun-gun shock could lead to cardiac arrest, even death.