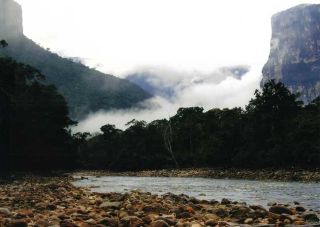 Conan Doyle's "Lost World," near Angel Falls in the jungles of Venezuela, in a 2007 photo. It was his visit to this area that inspired him to write about the idea that dinosaurs may still exist in places like this.
(Image: © Benjamin Radford)

The idea of still-living dinosaurs has captured the public imagination for well over a century.

The animated film "Up" (currently No. 1 at the box office) also takes place in this lost world, the plot involving the discovery of an unknown, multicolored dinosaur.

For most of us, fiction is good enough. Yet some believe that giant dinosaurs still exist today, just beyond the reach of scientific proof.

There are hundreds of lakes harboring reputed monsters around the world, from Scotland's Loch Ness to Canada's Lake Okanagan, America's Lake Champlain to Argentina's Lake Nahuel.

The explanations for such monsters include dinosaurs and dinosaur-like animals. Believers and researchers ask what else could be so big, and account for the sightings.

Many believe that lake and sea monster reports can be "explained" as animals like the plesiosaur (a long-necked aquatic reptile that reached 40 feet in length) or the ichthyosaur (shonisaurus sikanniensis), which were as big as a submarine.

In the remote jungles of central Africa, native stories tell of a dinosaur-like creature said to be up to 35 feet long, with brownish-gray skin and a long, flexible neck. Many believe that it lives in caves it digs in riverbanks, and feeds on elephants, hippos, and crocodiles.

Roy Mackal, a retired University of Chicago biologist who conducted two expeditions in search of the Mokele-Mbembe, believes that the descriptions of the creature suggest "a small sauropod dinosaur."

Despite more than two dozen searches for the "living dinosaur" as recently as last year, evidence is elusive. There are no photographs or films of the creature, no bones or teeth, no evidence beyond stories and anecdote.

Of course the fatal flaw in the idea that giant dinosaurs still lurk in remote jungles or cold, deep lakes is that all the evidence suggests they died out about 65 million years ago. Many of the lakes said to hide dinosaurs were created only about 10,000 years ago.

If dinosaurs had existed up until much more recently — say, the Nixon administration or even Shakespeare's time — the likelihood of a few remaining, lonely huge dinosaurs might be plausible. But 65 million years is a long time for giant dinosaurs to live and die without leaving any recent fossils.

Yet scientifically speaking, not all dinosaurs died out. Most of us see dinosaurs every day, and some people even have them in their homes. Birds are the modern version of dinosaurs, though seeing Will Ferrell or Jeff Goldblum running terrified from an approaching pigeon just isn't very dramatic.