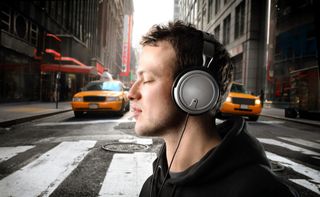 The number of pedestrians who have been killed or injured while wearing headphones has more than tripled in six years, according to a new study.

Researchers gathered information on 116 vehicle accidents in the United States involving pedestrians wearing headphones. More than two-thirds of the victims were male and under 30 years old.

"Everybody is aware of the risk of cell phones and texting in automobiles, but I see more and more teens distracted with the latest devices and headphones in their ears," lead author Dr. Richard Lichenstein, an emergency room physician at University of Maryland Hospital for Children, said in a statement.

The study was published online Jan. 16 in the journal Injury Prevention.

Researchers reviewed cases of pedestrian injuries and deaths in national news reports and databases that were reported between 2004 and 2011. They included accidents where the pedestrian was wearing headphones but excluded cases where the device being used was a cellphone.

More than half of the vehicles involved in the accidents were trains. Lichenstein said that based on the data they collected, it's not clear whether these pedestrians were crossing train tracks or fell on the tracks.

About a third of the vehicles' drivers reported sounding a horn as a warning before the crash.

Lichenstein and colleagues acknowledged that the increase could partly be due to increased media reporting of accidents involving youths, as well as fewer opportunities for young people to drive vehicles.

"Teenagers may not be as experienced or as conscious of their surroundings, and they're just zoning in on their music," Lichenstein said.

Distraction can put you at risk

Two likely reasons why headphone use is linked with vehicle injuries and deaths are distraction and sensory deprivation, according to study authors.

Distraction caused by the use of handheld devices can cause "inattentional blindness," which reduces people's mental attention to their surroundings.

Headphone wearers can also experience sensory deprivation, in which a person's ability to hear a train or a car horn is blocked by sounds coming from the device.

"Not only are you distracted, but you can't physically hear, which can put you at risk," Lichenstein said.

He said that because electronic devices such as mobile phones and MP3 players are only becoming more popular, people should be more thoughtful about when and where they use them.

"If you use headphones, keep the volume down, be aware of where you are, and realize that you may not be able to hear someone warning you that you're in harm's way," he said.

Pass it on: Wearing headphones while walking may be unsafe, especially in areas with moving vehicles.