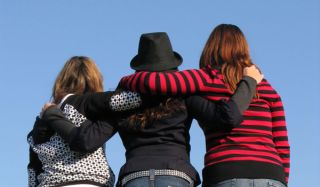 Girls have a harder time coping than boys when a friend disappoints them, a new study suggests.

Girls in the study reported feeling more anger and sadness, compared with boys, when a friend violated their expectations of friendship, such as by telling their secrets, the researchers said.

In addition, girls were just as likely as boys to report that they would seek revenge against the offending friend.

The findings contradict previous research suggesting girls are better at friendships than boys, the researchers said.

The study has implications for how to help children maintain their friendships in a healthy way, especially for girls when a friend is unreliable, doesn't provide emotional support or betrays them, the researchers said.

"When we try to help children who are struggling in their friendships, we may need to focus on somewhat different issues for boys versus girls," said study researcher Julie Paquette MacEvoy, an assistant professor at Boston College's Lynch School of Education. "For girls, it may be critical to help them learn how to better cope when a friend lets them down."

MacEvoy, who conducted the study while at Duke University, and colleagues surveyed 267 kids ages 9 to 11. The children were shown 16 hypothetical stories in which they were asked to imagine that a friend violated a core expectation of friendship. These stories included a friend failing to hold up responsibilities in a joint school project, resulting in a bad grade for both friends, and a friend shrugging off the seriousness of another friend's sick pet, saying, "It's no big deal, it's just a pet."

Girls were more bothered by the transgressions, felt more anger and sadness , and were more likely to think the offense meant their friend did not care about them or was trying to control them, the researchers said.

For both genders, the angrier they felt, the less likely they were to want to fix the relationship.

Sadness had the opposite effect. The more sadness the children reported feeling, the stronger their desire was to want to solve the problem and maintain the friendship.

In this way, sadness can sometimes function like "social glue" that holds relationships together , the researchers said.

Pass it on: Girls have a harder time dealing with transgressions in friendship.