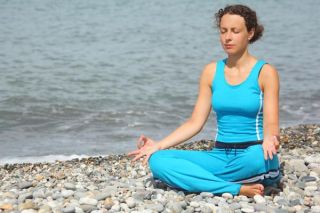 Meditation seems to improve the quality of life for people with multiple sclerosis, reducing their depression, fatigue and anxiety, a new study finds.

Participants in the study practiced "mindfulness mediation ," in which one learns to pay attention to what one is feeling physically and mentally from moment to moment. Some of the benefits could still be seen in MS patients six months later, the researchers said.

Multiple sclerosis, a disease that affects the nervous system, has a broad range of possible symptoms, including diminishing mobility, blurred vision and impaired mental ability, but its course is often unpredictable. It usually strikes people between ages 18 and 40, as they are beginning to build their careers and social relationships. About half the patients suffer from depression .

Mindfulness mediation could provide people with MS a way to deal with the psychological and social challenges they experience, said study researcher Paul Grossman, of the University of Basel Hospital in Switzerland.

"I see this as a viable complement to modern medical management," he said. The current focus on dealing with the physical consequences of MS is "certainly valuable, but there's this whole other realm of experience of patients that has not been taken into account, that mindfulness interventions might be able to help out with."

Grossman and his colleagues examined 150 MS patients and randomly assigned about half to take part in an eight-week meditation program. This program included many types of exercises and homework assignments, all designed to heighten participants' awareness of the here and now, with no room for dwelling on their situation.

Some exercises focused on paying attention to physical sensations, such as breathing. Others involved concentrating on life experiences and social interactions.

Six months after the program, those who had meditated reported the same level of lessened fatigue . However, other benefits dropped off. Researchers said that indicated the participants might benefit from "booster" meditation programs.

While there are other treatments for fatigue and depression, meditation may provide a broader benefit.

"These psychological problems are normal consequences of having to cope with extraordinary life challenges," Grossman told MyHealthNewsDaily. "And I don't know of any other intervention besides mindfulness-based interventions that really aims not at treating specific symptoms but at helping people to gain another perspective on life."

The study will be published tomorrow (Sept. 28) in the journal Neurology.