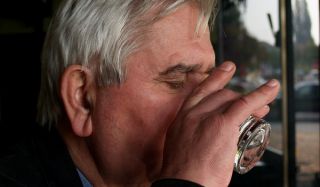 Downing just two Brandy Alexanders is enough to make it hard for an older person to walk home without tripping and falling, a small new study suggests.

People age ages 60 and older should be extra careful to avoid falls after they've had something to drink, even if their blood alcohol levels aren't that high, said study researcher Judith Hegeman of Saint Maarten's Clinic, a hospital in the Netherlands hospital that specializes studying in movement.

"Almost everybody who has ever consumed alcohol has experienced what effect it can have on your walking pattern," Hegeman told MyHealthNewsDaily. Because older people might have a harder time walking in general, "we assumed that the effects of alcohol would be even stronger in old persons."

Falls are the No. 1 cause of nonfatal injuries in the United States, according to the Centers for Disease Control and Prevention. Nearly 2 million people ages 65 and older had a nonfatal fall in 2007, the highest number of falls of any age group.

Falls can break bones and can easily spur social isolation if there's no way for a person to get out and live his or her life, Hegeman said.

To test the effects of alcohol on walking ability, researchers asked 13 healthy men and women, whose average age was 62, to walk on a treadmill and avoid 30 thin beams put in their paths. About 5 percent of the time, the participants tripped over the beams while sober, Hegeman said.

Then, the participants were given an alcoholic drink and asked to avoid the same 30 obstacles. Twelve of the 13 adults had a delayed response to stepping over the beams, Hegeman said.

"Everybody was struggling more after the alcoholic drinks," Hegeman said.

After a second drink, all 13 had a delayed response, and the participants tripped twice as often, on average, as they did before sipping spirits. When less time to avoid the obstacles was given, they tripped about 20 percent of the time, she said. A standard breathalyzer test revealed the participants had blood alcohol levels ranging from 0.03 to 0.06 percent, below the 0.08 percent legal limit for driving in the United States.

"It is not possible to draw a straight line between our experiment and driving tests, however, the results make you wonder whether the legal limits for blood alcohol levels and driving are OK," Hegeman said.

Next, Hegeman plans to study the impact of drugs and other factors on fall rates in older adults.

The study was published Sept. 21 in the journal BMC Research Notes.