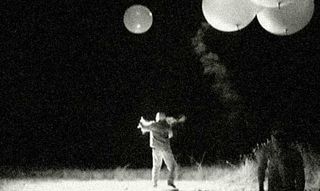 Joe Rudy releases a burning flare along side the smoke trail left by a vanished balloon while Chris Russo kneels down to get the next flare ready.
(Image: © Chris Russo & Joe Rudy via Skeptic.com. Used with permission)

New Jersey pranksters Chris Russo, 29 and Joe Rudy, 28, had their state buzzing Jan. 5 when they used helium balloons, red flares, fishing line and duct tape to create UFOs that had many residents believing the aliens were here.

Russo and Rudy revealed their hoax on April Fool's day, as our columnist Benjamin Radford reported. They had videotaped the whole thing.

Now they've been fined $250 each plus 50 hours of community service each.

The Morris County prosecutor said the setup posed a potential fire hazard and could have interfered with air traffic at nearby Morristown Airport. "If you were a pair of 17-year-olds, I would tell you to grow up," judge Michael Carlucci said to the men. "You're not 17."

Neither were most of the people who believed they'd seen UFOs.

[Read the Full Story at The Star Ledger]

In our new Etc. format, LiveScience provides links to articles of interest around the web. It is in Beta.

{{ video="LS_090402_ufo_hoax" title="The Great New Jersey UFO Hoax" caption="When residents of Morris County, NJ saw bright lights in the night sky Jan. 5, many thought it was a UFO. But Joe Rudy and Chris Russo perpetrated the hoax with helium balloons and flares as part of a social experiment to create a media event. It worked. Credit: Chris Russo & Joe Rudy via Skeptic.com. Used with permission" }}