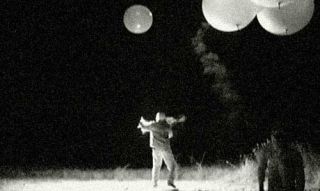 Joe Rudy releases a burning flare along side the smoke trail left by a vanished balloon while Chris Russo kneels down to get the next flare ready.
(Image: © Chris Russo & Joe Rudy via Skeptic.com. Used with permission)

Strange lights appeared over Morris County, New Jersey, on Jan. 5 this year. The bright red lights were first noticed in the night sky by an eleven-year-old girl, who pointed out three lights grouped together, and another pair some distance away.

The lights moved silently and slowly, then disappeared one by one.

The girl's father, a pilot, said he was baffled: "I've been in aviation for 20 years and never seen anything like it." Police fielded calls from alarmed residents, and the supposed UFO made national news.

I examined the case the next day, noting striking parallels between this sighting and the infamous 2008 Phoenix Lights hoax in which flares were tied to balloons. I provided a detailed, point-by-point analysis showing that the New Jersey lights were almost certainly a copycat hoax.

However, many people refused to accept the skeptical explanations offered by myself and others, concluding that alien spacecraft was more likely.

Skeptical of the skeptics

Some UFO buffs ridiculed the idea that this was a hoax, claiming that the movements of the lights ruled out the possibility of flares.

One writer stated that "thousands of eyewitnesses said they saw a giant, solid, triangular object fly over their heads." Often the UFO-theory defenders cherry-picked their evidence and eyewitnesses, for example dismissing those who saw balloons tied to flares as mistaken while giving credence to others who didn't see balloons. (For a fascinating glimpse into the rabid denials offered against the flares explanation, see the readers' comments section of my initial column.)

The case was even profiled on the popular History Channel show "UFO Hunters." Bill Birnes, the lead investigator (and publisher of "UFO Magazine") also dismissed the flare explanation. According to the show, "police say the unidentified flying object was nothing but flares — a theory "UFO Hunters" has already tested and proven implausible."

The show was very influential, with many viewers accepting their conclusions without question.

The case remained open (among many UFO groups anyway), until this week when, on April Fool's day, two 20-something college kids, Chris Russo and Joe Rudy, admitted to the hoax.

"We set out into the woods …carrying one helium tank, five balloons, five flares, fishing line, duct tape, and a video camera," the duo explain now. "After filling up one 3-foot balloon with helium, we tied about five feet of fishing line to the balloon, secured the line with tape, then tied and taped the flare to the other end of the line. Once all five balloons were ready, we struck the 15-minute flares and released them into the sky."

{{ video="LS_090402_ufo_hoax" title="The Great New Jersey UFO Hoax" caption="When residents of Morris County, NJ saw bright lights in the night sky Jan. 5, many thought it was a UFO. But Joe Rudy and Chris Russo perpetrated the hoax with helium balloons and flares as part of a social experiment to create a media event. It worked. Credit: Chris Russo & Joe Rudy via Skeptic.com. Used with permission" }}

Realizing that, in the conspiracy-minded UFO community, hoax admissions are suspect, they carefully documented their prank in a series of videos. For all but the outer fringe of UFO buffs who may suspect that those videos themselves were faked, their explanation is iron-clad and proven, case closed.

In a posting at Skeptic.com, the pair said the hoax was a "social experiment on how to create your own media event surrounding UFO sightings…to show everyone how unreliable eyewitness accounts are, along with investigators of UFOs."

Indeed, that point was well made.

On the "UFO Hunters" show, investigator Birnes and his team reviewed footage of the lights, concluding that "these lights are moving without any independent movement… you can almost make out a frame." Yet we know this analysis was completely wrong: the lights were in fact moving independently (tied to balloons in the wind), and there was no frame at all, triangular or otherwise. As Russo and Rudy note, "If a respected UFO investigator can be easily manipulated and dead wrong on one UFO case, is it possible he's wrong on most (or all) of them?"

From red lights in the sky to red faces at the History Channel, this solved UFO case proves that you can't always believe what you see, either in the skies or on TV.

Benjamin Radford is managing editor of the Skeptical Inquirer science magazine and a science-based paranormal investigator. His books, films, and other projects can be found on his website. His Bad Science column appears regularly on LiveScience.