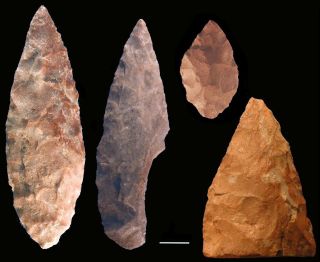 Stone tools known as bifacial points recovered from Blombos Cave, South Africa. They were made during the Middle Stone Age, about 75,000 years ago, by anatomically modern humans. Scale bar: 1 cm (0.4 inches).
(Image: © Courtesy of Christopher Henshilwood, University of the Witwatersrand)

The climate of South Africa was once much wetter than it is today, and those lush times may have spurred human populations through especially innovative periods, new research shows.

"We provide for the first time really good evidence that the occurrence and disappearance of these first finds of human innovation are linked to climate change," said study author Martin Ziegler, an earth science researcher at Cardiff University in Wales.

Before these periods of innovation, humans were quite primitive, with the most impressive technology being hand axes, Ziegler said. But during these wet periods, more advanced stone and bone tools appear in the fossil record, as well as painted symbols on cave walls that suggest the development of language.

Archaeologists have also found some of the first evidence of constructed plant beds during these periods, and shells thought to be worn as adornments or jewelry, Ziegler said. Among the most important periods analyzed in the study date to 71,000, and a period between 64,000 and 59,000 years ago. [Top 10 Mysteries of the First Humans]

In the study, Ziegler's team reconstructed South Africa's climate over the last 100,000 years. They pieced together the record by analyzing sediment cores taken from the offshore region near the southeastern tip of Africa.

Chemicals within the sediment suggest how much rainfall fell nearby, Ziegler said, as well as other indicators of climate.

The climate reconstruction agrees with records from elsewhere in the world. During these lush periods in South Africa, much of the rest of Sub-Saharan Africa was experiencing a drought, while much of the Northern Hemisphere was very cold, Ziegler said. The study suggests that cold conditions in the north reoriented Atlantic Ocean currents, shifting the global monsoon belt — with its torrential rains — to the south, he said.

The study shows an association, but not a cause-and-effect relationship between wetter conditions and human innovation. But it may be that during these periods, drought farther north forced ancient humans into South African refuges, leading to a "bottleneck" of competition, and cross-cultural fertilization, Ziegler said.

Future work may look at the connection between human populations elsewhere, and local climate shifts.

But insights from these locations in South Africa are vital, because they are thought to "reﬂect the emergence of modern behaviors of innovation, language and cultural identity," the authors wrote in the study, published today (May 21) in the journal Nature Communications.