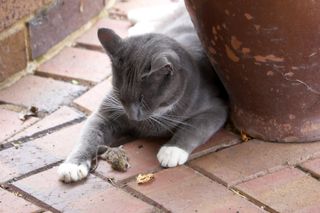 It’s an all-too-familiar story for the owners of indoor-outdoor cats: You open the door to let Kitty in for dinner and what does she bring with her? A dead rodent, of course.

Such impolite behavior leaves many cat owners scratching their heads. Why, after all, would your cat need to kill her meals when that bowl of Friskies is filled to the brim? Is she just a whole lot meaner than she looks?

Before determining that their cat is simply a cold-blooded killer, cat owners should understand a few facts about what's driving their pet's behavior.

Cats are, first and foremost, natural-born hunters, as recent studies of the effects that feral and indoor-outdoor cats have on bird and rodent populations have shown. Cats allegedly kill billions of small animals every year in the United States alone. But that doesn’t make them evil — just extremely well-adapted to a carnivorous lifestyle.

Though they were first domesticated nearly 10,000 years ago, cats retain the keen hunting instincts of their wild ancestors, as well as the simple gut that allows them to digest raw meat.

However, many cats don't eat their prey, and sometimes they don't even kill it. (If you've ever had to chase an injured squirrel out of your kitchen, then you've seen this behavior firsthand.) Spayed female cats are the most likely to bring gory gifts to their owners. But they have their reasons.

In the wild, cat mothers teach their young how to eat their food by bringing home dead or injured prey. Domestic cats are no different. But in this modern age of spayed domestic cats, many female felines have no young to whom they need to pass on their hunting wisdom.

By leaving a dead animal on the back porch, your cat is acting out its natural role as mother and teacher. You, her loving owner, represent her surrogate family. And frankly, she knows you would never have been able to catch that delicious mouse on your own.

So before you chastise your cat for her deadly habits, consider what her behavior really means. From eating to using the litter box, your cat's habits are based on a highly evolved survival instinct.