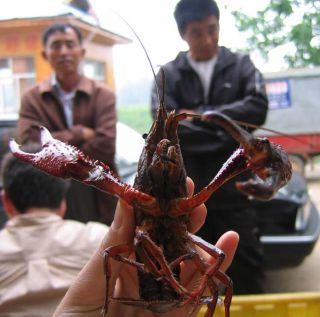 This Behind the Scenes article was provided to LiveScience in partnership with the National Science Foundation. They go by various names — crawfish, crayfish, crawdads, mudbugs — but one thing is common to all discussions of the lobster-like freshwater crustacean: they invoke imagery of the Louisiana bayous. This surely comes from the fact that one of the most famous crayfishes, the Louisiana crayfish Procambarus clarkia, is a staple in Cajun cuisine. However, as we found out through our NSF-IGERT research, Louisiana crayfish should also invoke imagery of rice paddies in China.     Although native to the United States, the Louisiana crayfish has been introduced for aquaculture in countries around the world including Brazil, Portugal, Spain, France, Kenya, and Uganda, among others.   The Louisiana Crayfish, xiao long xia (literally “small dragon shrimp” in Mandarin), has been present in China since 1940. As they do in Louisiana, crayfish in China have considerable economic value as a food source.   However, as an exotic invader, crayfish also threaten native Chinese fishes and feed on several important local plants including rice and lotus crops. Crayfish have also been suggested as a possible biocontrol agent for the snail vector of the human disease schistosomiasis. Yet the overall costs and benefits of crayfish introduction in China remain largely undocumented.   Crayfish: the good, the bad, and the financial With the encouragement of our advisor David Lodge, we became interested in the status of the Louisiana crayfish in China. We made a preliminary research trip to central China in the summer of 2008, during which we were able to experience local crayfish culture first hand. Our host was Jianqing Ding, an expert in biological control of invasive plants at the Wuhan Botanical Garden of the Chinese Academy of Sciences. We conducted interviews with scientists and fishermen and traveled across southeastern China to collect specimens and examine potential sites for studying crayfish.   The Chinese ecologists we spoke to all acknowledged the negative ecological impacts caused by Louisiana crayfish. In light of this and published negative impacts of crayfish introductions in Europe and South America, we were surprised by how welcome this exotic crayfish was in the Chinese community, even among rice farmers whose crops were being destroyed.   Although farmers recognized that aquatic plant destruction and drained ponds due to the burrowing activity of crayfish as considerable negative impacts, crayfish-stocked ponds were abundant. Farmers did not hesitate to stock crayfish in some ponds and use aggressive chemical treatments to eradicate them from others. We witnessed crayfish-induced destruction on our first trip to a rice paddy. As we hiked through an invaded field in which much of the vegetation had been destroyed, we noted that the water levels were obviously low, and the water present was murky.   As we were leaving, a neighbor who had heard that we were studying crayfish came up to us and was excited to take us to his pond where he had begun to stock them — and asked us for advice on how to improve his yields! When we asked why he would introduce the crayfish with the knowledge that they could devastate nearby agriculture, he admitted that the business of selling crayfish was too lucrative to pass up. Another rice farmer explained that if he had the necessary resources, he said he would sell only crayfish and eliminate rice farming all together. Culture, economics and taste As we traveled the Chinese countryside and met more farmers and fishermen with similar stories, we began to understand the pervasive point of view, one that had not crossed the minds of these two American ecologists.   This novel perspective on invasive species was perhaps most elegantly stated as we made small-talk with a taxi driver in Wuhan. As we explained our research through an interpreter, the taxi driver smiled and asked "Can they really be considered a problem if people eat them?" Perhaps this beneficial perception of crayfish explains why there have been fewer ecological impact studies conducted in China than in other countries.   The larger lesson learned was that exotic species need to be considered in the full context of their introduced range: local culture and economics are important in addition to ecology. Although this message is becoming more common in the invasive species literature, it wasn’t until our trip to China that we truly understood it.   This real world experience is at the heart of our IGERT program, GLOBES (Global Linkages of Biology, the Environment, and Society), which emphasizes an interdisciplinary approach to issues of human and environmental health. We are currently planning more trips to China to continue researching the Louisiana crayfish introduction, and we are enlisting help from our fellow GLOBES students in developing a more interdisciplinary project for the future.   We aim to use Louisiana crayfish in China as a case study to emphasize how regional and cultural contexts intimately relate to the ecology of species invasions.