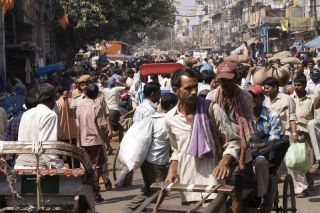 Determining the world’s largest city is a bit of a puzzle — does largest mean most populous? Biggest land area? Densest population?

Most experts agree that Tokyo is tops by some measure, with a population of 35.2 million people (equal to the entire population of California) packed into a surrounding metropolis about as large as the greater New York metro area. The densest part only has about 8 million inhabitants, though. The rest of the Tokyo prefecture includes 23 wards (which could be called separate cities). The entire prefecture is ruled by the same government: the Tokyo Metropolis.

In the United States, New York is the largest city with more than 8.2 million people in an area 302 square miles. Los Angeles is the second largest U.S. metropolitan area in terms of population, and Chicago ranks third.

The Chinese city of Chongquing is sometimes estimated to be the largest city in the world, with 30 million people, but experts say that many of those who are said to live in the city of Chongqing are actually agricultural workers living in a rural setting. Estimating the size of rapidly growing cities with flexible populations — like Shanghai or Mumbai — can be a challenge.

Expect cities to grow. In its 2011 report on global urbanization, the UN wrote that between 2011 and 2050, the world population was expected to increase by 2.3 billion to reach 9.3 billion. At the same time, the population living in urban areas is projected to gain 2.6 billion. So, experts predict that urban areas of the world will absorb all the population growth expected over the next four decades while at the same time drawing in some of the rural population.

In the United States, half the population lives in coastal areas.