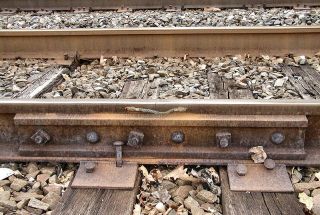 A penny on the track won't cause any harm.
(Image: © Creative Commons Attribution-Share Alike 3.0 Unported | Sturmovik at en.wikipedia)

Mrs. O’Leary’s cow, a kicked lantern and the Great Chicago Fire; David’s sling-stone and Goliath; the thorn in the Aesop’s lion’s paw. We like stories about small objects with the power to bring mighty things low. After all, for want of a nail, the kingdom was lost.

So it’s no surprise that, somewhere along the line, someone got the idea that a penny on the railroad tracks could derail a train. On its face, though, it is difficult to see how a 1.55-millimeter piece of copper-plated zinc could derail the average 200-ton locomotive.

Derailments have numerous causes, but the results generally fall into a few categories: the wheels climb off the rail, the rail gauge widens somehow, or rail-rollover causes wheels to fall between rails. It is also possible for a railcar’s centerplate to separate from the truck that carries it, or for some other component to fail catastrophically. To affect a train in such a way would require something larger and more massive than a penny – something on the scale of a cow or a car. [What’s a Penny Worth?]

Not that laying a penny on a track is without its dangers. A squished penny could hypothetically fly out at harmful speeds, and the records of the Federal Railroad Administration are rife with cases of pedestrians – some in the process of planting pennies – experiencing unfortunate rendezvouses with speeding locomotives. In fact, 400 people die each year from trespassing along railroad rights-of-way, and almost that many are injured, making trespassing the leading cause of rail-related deaths in America.