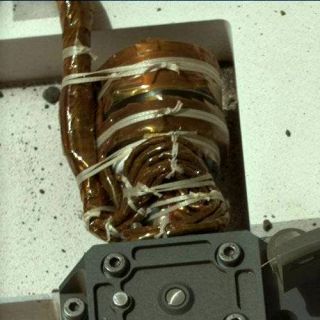 Five thousand years ago, the Egyptians used reef knots to fasten their belts. In the first century, Greek physicians employed both reef knots and clove hitches to tie surgical nooses. Today, these ancient knots are coming in handy on Mars.

On the decks of NASA's Curiosity rover, some of the most advanced pieces of equipment ever developed are being held together by some of the oldest forms of human technology: cleverly looped ropes. Apparently, when you're sending a robot millions of miles out of reach, time-tested tying methods win out over newfangled epoxies or ratchet zip ties.

Knot enthusiasts at the International Guild of Knot Tyers (IGKT) Forum have analyzed color photos that the Martian rover recently took of the equipment on its decks. As PopSci.com reports, the photos reveal some intricate knot work.

According to knot aficionado David Fred, NASA engineers appear to have primarily employed the "spot tie" on the Curiosity rover — a combination of a clove hitch and a reef knot that works both to bind cables and affix cable bundles to tie-down points. The spot tie is a knot of choice in space missions, Fred explained, because it applies even pressure on bound material without getting overly tight.

"The inner profile of the clove hitch is smooth," Fred wrote on the IGKT Forum. "Both turns bear on the bound object evenly throughout their contact.  The contact area is increased by having two turns.  When the reef knot is added, the ends are pulled up and away from the object.  There is some extra pressure exerted by the reef knot on the riding turn, but this is distributed onto the two underlying turns." [The Mysterious Physics of 7 Everyday Things]

Furthermore, the knot remains secure without constricting cables or wearing them down over time, as zip ties are prone to do.

Fred noted that knots have almost always had a place in interplanetary missions. "If human civilization ends tomorrow, interplanetary landers, orbiters and deep space probes will preserve evidence of both the oldest and newest of human technologies for millions of years," Fred wrote.

The ongoing use of this proven technology, he continued, "is a testament to the effectiveness of properly chosen knots tied by skilled craftspeople."