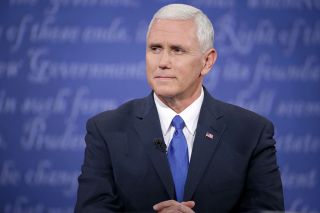 Addressing the Munich Security Conference on Saturday (Feb. 18), Vice President Mike Pence said that the United States would "hold Russia accountable" for their actions, such as the violence in Ukraine, and would stick by NATO, the military alliance that President Donald Trump had once said was obsolete, according to news reports.

But what power does the VP really have, and what does the vice president do while in office? If you don't know, you're not alone.

The vice presidency is "the least understood, most ridiculed and most often ignored constitutional office in the federal government" in the words of the Senate Historical Office. Confusion about the VP's role reflects the fact that the office has evolved throughout history, and varies greatly depending on the personality and talents of the individuals who fill it.

Vice presidents have two official, constitutionally mandated capacities. First and foremost, they stand first in the presidential line of succession, ready to ascend to the nation's highest office upon the death, resignation or removal of the president. This has often been more than just an honorary role; fourteen former vice presidents have subsequently become president — more than half of them after a president died.

Secondly, the VP serves as "president of the Senate, but shall have no vote, unless they be evenly divided" according to the U.S. Constitution. In other words, the VP may cast a tiebreaking vote when members of the U.S. Senate are locked in a 50-50 stalemate about whether or not to pass a law. But these Senate deadlocks occur infrequently. On Feb. 7, however, Pence cast the tiebreaking vote to confirm Betsy DeVos as the Secretary of Education, the first time in history the vice president has cast a tiebreaker to confirm a cabinet secretary.

So what else does the VP do as "president of the Senate?"

The Constitution doesn't elaborate on the matter, and so the extent to which the vice president presided over Senate sessions has varied greatly from one administration to the next throughout the 19th century. According to the Senate Historical Office, some VPs had great parliamentary skill and presided well, while others disliked the task, performed it badly, or chose to spend most of their time away from Washington, leaving in charge a "president pro tempore"— usually the longest-serving senator in the majority party.

Since the time of the nation's founding, the involvement of a member of the executive branch in legislative affairs rankled many. Over time, vice presidents' senatorial duties have diminished. They now preside over the Senate only on ceremonial occasions or when a tiebreaking vote is needed. And as their senatorial role has shrunk, their influence in the executive branch has grown. Most recent vice presidents have acted as integral members of the president's cabinet, weighing in on important decisions and helping the president relay his ideas to the rest of the government.

The former vice president, Joe Biden, explained how all this works to a fifth-grader during the 2008 campaign: "I've been a senator a long time. A lot of things, I know a little bit about. And my job is to say to Barack Obama when I think he's wrong, 'Well Barack, what do you think about this?'" Biden said. "And when the President comes up with an idea … and he introduces a law and he sends it up to the Congress and says Congress, vote for this, well, I have a lot of experience in the Congress and what I do I literally go up to the Congress … and I'll say guys and women, this is what we want to do, and try to convince them to change the law ... That's the kind of thing the vice president does."