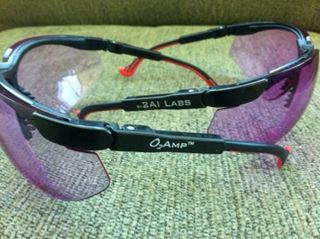 Evolution has tailored the human eye for detecting red, green, blue and yellow in a person's skin, which reveals areas where that person's blood is oxygenated, deoxygenated, pooled below the surface or drained. We subconsciously read these skin color cues to perceive each other's emotions and states of health. Rosy cheeks can suggest good health, for example, while a yellowish hue hints at fear.

"Our eyes have been optimized to sense spectral changes in skin color," said Mark Changizi, an evolutionary anthropologist and director of human cognition at 2AI Labs in Boise, Idaho. "It turns out you can do even better, because other parts of the spectrum that we perceive in skin are just noise (they don't provide useful information). If you get rid of the noise, you're amplifying the signal." [Red-Green & Blue-Yellow: The Stunning Colors You Can't See]

Based on Changizi's color perception research, he and his colleagues have designed three versions of O2Amps, which are currently being sold to medical distributors and will hit wider markets in 2013.

Each of the three designs filters light in a different way, for a specific purpose: "Vein-finders" increase visibility of red, oxygenated blood by heightening the contrast with green, deoxygenated blood, in order to help nurses and clinicians quickly locate patient's veins. "Hemo-finders" exaggerate the color difference between blue-toned skin regions where blood is pooled and yellowish regions drained of blood, giving people a "zombie appearance," Changizi said. Those are intended for use by paramedics and other emergency personnel.

The third kind, "health-monitors," enhance the wearer's perception of contrasts between red and green and between yellow and blue skin. These glasses will be used by doctors, who cite skin color when making about 15 percent of their diagnoses, but they'll also enable people in general to more easily detect health and emotional cues in those around them, by "enhancing the natural health-sense we evolved," Changizi, author of "The Vision Revolution" (BenBella Books, 2009), told Life's Little Mysteries.

"If you're angry, you get red. When you're showing weakness, the opposite is true — your blood becomes deoxygenated and your skin appears greener," he said. "Yellow is associated with fear because the blood gets pulled out of your extremities and flows into your organs. The opposite of being yellow with fear is being blue, which your skin exhibits when you're sedate. These are the kinds of things that are being signaled with these color signals. And whereas muscular facial expression signals can be faked, it's harder to fake actually being red in the face with anger, or feeling weak."

Expect to see these "mood-ring" sunglasses in stores sometime next year. "We're in conversations with Maui Jim, Luxottica (which owns Oakley) and other companies," Changizi said. "Color enhancement is something these companies are already interested in. Well, color vision evolved among primates to help us understand emotions and signals in skin. Now that we know what color vision is for, we can design eyewear specifically for it."