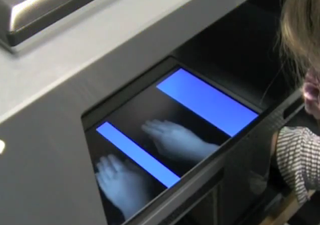 Dozens of newly discovered optical illusions competed for the title of "Best Illusion of 2012" last week at the annual meeting of the Vision Sciences Society in Florida. An illusion known as the "disappearing hand trick," which causes people to feel as though their hand has vanished, earned the top prize at the eighth annual contest.

Vision scientists from across the globe cast their votes May 14 at the Vision Sciences Society meeting, selecting from 10 finalists chosen from 59 entries. All the competing optical illusions are recent scientific discoveries.

The best of the bunch, the hand-vanishing illusion, works like this: A participant places both hands inside a box and tries to keep them still. Meanwhile, a live video of her hands is projected on the top of the box, and the footage is manipulated so that the hands appear to drift slowly toward one other. The participant, instructed to keep her hands apart, moves them accordingly. She eventually moves them out of reach of one other without knowing it, because the video continues to display footage of her hands close together. [Video of 'Disappearing Hand Trick' Illusion]

Next, the image of her right hand disappears, and the experimenter asks her to touch it with her left hand. She reaches toward it, but to her complete astonishment, her right hand isn't there where she thought it was! (It is farther to the right, of course.) The participant then pulls her hands out of the box, and to her great joy and relief, finds them both to be intact.

"It's the combined loss of vision and touch that creates an experience that the hand is missing," said Roger Newport, who discovered the trick with his colleagues Helen Gilpin and Catherine Preston, all of the University of Nottingham in the U.K. "It's very striking, and works for everybody who does it."

The runner-up is equally as striking, by way of hideousness. While celebrities are generally an attractive bunch, they don't appear so when viewed in pairs and cycled through in quick succession. It's called the "flashed face distortion effect," and it was discovered by accident by Jason Tangen, Sean Murphy and Matthew Thompson of the University of Queensland in Australia.

In the researchers' video, pairs of different faces are flashed in sequence, with empty space separating the left and right slideshows of faces. If you stare at the individual faces, they appear normal, but if you fix your eyes on the space between the faces, they suddenly become hideously deformed. [Video of 'Face Distortion' Illusion]

Cognitive scientists can't yet fully explain the newly discovered distortion effect, though it may result from the way our vision becomes normalized to the features of a face, causing the face that immediately follows it to appear abnormal by contrast. "If someone has a large jaw, [the effect makes it appear] almost ogrelike. If they have an especially large forehead, then it looks particularly bulbous. We're conducting several experiments right now to figure out exactly what's causing this effect."

It works for normal people's faces, too — though perhaps ogrelike mugs are less of a surprise in that case.