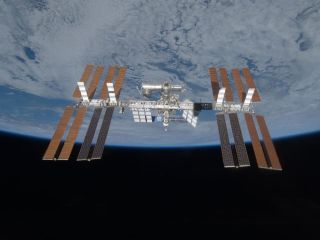 A visible film of dust collects on earthbound surfaces in just days. Well, the International Space Station has been in orbit for more than a decade, and not once has it experienced the tickle of a feather duster. Is it covered in space dust?

Nope. In fact, it's just a tiny bit dustier than the day it reached orbit.

First, a housekeeping lesson: According to Louis Bloomfield, a physicist at the University of Virginia, dust particles near Earth's surface descend because of gravity. Rather than dive-bombing surfaces like microscopic torpedoes, air resistance buoys the particles so that they fall at the sub-snail's pace of only millimeters per second. Most dust eventually lands on whatever is beneath it, such as a floor or shelf, and so these flat surfaces get dusty the quickest. But dust also sticks to vertical walls and even ceilings; in those places it's held in place by electrostatic or chemical forces rather than gravity. [Mysterious Physics of 7 Everyday Things]

Next, remember that vehicles in orbit are falling freely around Earth, but they never actually reach the planet because of how fast they're traveling sideways relative to it. If there were no gravity pulling the International Space Station down, it would go shooting off horizontally into deep space along a straight line path. Earth's gravity bends that straight path into an arc that loops around the planet as an orbit.

Space dust also orbits Earth in a similar manner, and because there's almost no air in its vicinity, it faces much less air resistance than its earthly equivalent. Bloomfield states on his website that space dust particles travel at a range of speeds. "Those with little horizontal speed simply drop into the atmosphere and are lost," he writes. "But many dust particles have tremendous horizontal speeds and orbit the Earth like tiny space shuttles or satellites."

Whether they are plunging into the atmosphere or zipping around Earth, the particles' velocities are typically very different in speed and direction from the velocity of the space station. By Bloomfield's calculations, the two objects' relative speed can easily exceed 10,000 mph (16,000 kph). Such a fast dust particle doesn't settle when it hits the space station; rather, it collides violently with the surface, then bounces off. These collisions can damage windows and sensors and erode the space station's surface, but they don't make it dusty.

Only very rarely does a dust particle happen to be traveling so close to the space station's speed as to allow it to land softly on its surface. Even when this does happen, both objects are falling freely, so gravity doesn't help press one against the other. However, those electrostatic and chemical forces that hold dust to walls and ceilings on Earth also exist in space, and so rare dust particles that come in for a graceful enough landing can stick with the space station that way.