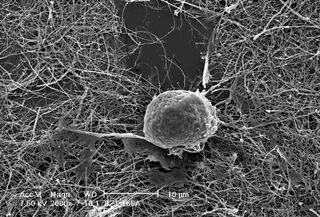 Bone cells (in the center) grow on a substrate of carbon nanotubes.
(Image: © U.C. California, Riverside)

A glass of wine or a bottle or two of beer a day may strengthen the bones of older men and women, but drinking more than that could actually weaken bones, according to new research from the Human Nutrition Research Center on Aging at Tufts University in Boston.

The research, on men and post-menopausal women over 60 years of age, found that regular moderate alcohol intake was associated with greater bone mineral density (BMD).

While earlier research had suggested the link between moderate drinking and improved bone density, the Tufts' study looked specifically at the "possible effects of three alcohol classes, beer, wine and liquor, on BMD," said Katherine Tucker, the director of the epidemiology research program at Tufts. "We saw stronger associations between higher BMD and beer drinkers, who were mostly men, and wine drinkers, who were mostly women, compared with liquor drinkers," she said.

Tucker and her colleagues speculated that silicon found in beer is contributing to the higher bone density in men. It is less clear why liquor and wine might protect bone density.

The researchers also emphasized that drinking too much is damaging to bones and noted that "no one should depend solely on alcohol to maintain bone density."

The study was published in the American Journal of Clinical Nutrition. Research in 2006 by Tucker found that carbonated cola drinks cause a decrease in bone density in older women, but not in men.

{{ video="nnm4030_osteoporosi_isdn" title="Bear Bones Approach to Osteoporosis" caption="Hibernating bears don't lose bone mass even though they're inactive for months. Could human bones be taught this trick?" }}