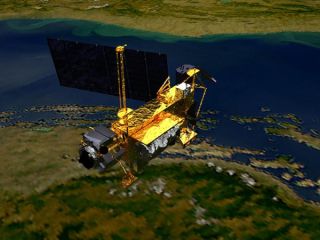 An artist's concept of the Upper Atmosphere Research Satellite (UARS) satellite in space. The 6 1/2-ton satellite was deployed from space shuttle Discovery in 1991 and decommissioned in December 2005. CREDIT: NASA

As of 10:30 a.m. EDT (1430 GMT) today (Sept. 23), NASA's Upper Atmosphere Research Satellite (UARS) is projected to fall to Earth, and could land somewhere in the United States.

Let us be clear: There's an extremely remote chance that UARS will fall on you . But, for good measure, if UARS, or some other spacecraft, did fall on your property, could you keep it? And, if the bus-size satellite flattened your house, who would be on the hook for the repair bill?

First off, UARS is the property of the U.S. government, and remains so even after it comes back to Earth. To keep a piece, or to try to sell it, would be illegal unless NASA relinquishes ownership of the debris. When people tried to sell pieces of the Space Shuttle Columbia, for example, the government shut them down, pulled their auctions from eBay and reclaimed the debris. But that was a special case because the Columbia accident was under investigation at the time. When parts of the space station Skylab landed in Australia in 1979, NASA did not reclaim them. In the present case, NASA may or may not ask for UARS debris back.

The good news is that if the satellite, or even just sizable chunks of it, did in fact slam into your house, you wouldn't need to sell your new space souvenir to pay for repairs. By international law, NASA would have to foot the bill.

Liability for damage caused by objects falling from space is regulated by the 1972 Convention on International Liability for Damage Caused by Space Objects, according to NASA public affairs officer Beth Dickey. When the U.S. signed the pact, it agreed to be "absolutely liable to pay compensation for damage caused by its space object on the surface of the Earth or to aircraft in flight." That goes if UARS, or anything else NASA has put into orbit, crashes down in Kansas, France or Zimbabwe. [Huge Tumbling Satellite Could Fall to Earth Over US Tonight or Saturday, NASA Says]

The terms cover just about everything. In this case, "damage" is defined as loss of life, personal injury or other impairment of health; or loss of or damage to property of states or of persons, natural or juridical, or property of international intergovernmental organizations.

And the payout is fairly good. Again, quoting the treaty: "The compensation which the launching State shall be liable to pay for damage under this Convention shall be determined in accordance with international law and the principles of justice and equity, in order to provide such reparation in respect of the damage as will restore the person, natural or juridical, State or international organization on whose behalf the claim is presented to the condition which would have existed if the damage had not occurred."

One slight hitch in the treaty is that you have to present your claim no later than one year following the incident (or discovery of the damage). If you've got a bus-size satellite sitting in your living room, however, we suspect that satisfying this condition would not be an issue.