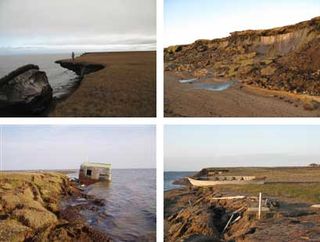 Top-left: Researcher Benjamin Jones measures erosion along a part of Alaska's Arctic coast where a block of permafrost (ground historically frozen year-round) has collapsed. Top-right: Another collapsed block of permafrost. Bottom-left: A nearly century-old whaling boat imaged in July 2007 along the Beaufort Sea coast near Lonely, Alaska had washed away a few months later. Bottom-right: A cabin along the Arctic Alaska coastline was recently washed into the ocean because the bluff it was sitting on top of was eroded away.
(Image: © USGS/Christopher Arp, Benjamin Jones)

Most of California isn't falling into the sea yet, but big parts of Alaska are.

In a possible sign of things to come, erosion of a stretch of Alaska's coast surged in recent years to more than double the average historical rate, threatening some towns, a new study finds. The loss of land is documented in photos that show newly collapsed sections of permafrost coastline as well as decades-old artifacts that have slipped into the sea.

Scientists caution that the study does not include the entire coastline, but they said the shift might be due to declining Arctic sea ice extent, increasing summertime sea-surface temperatures, the rising sea level, and increases in storm power and corresponding wave action.

"These factors may be leading to a new era in ocean-land interactions that seem to be repositioning and reshaping the Arctic coastline," the scientists write in the Feb. 14 issue of the journal Geophysical Research Letters.

The study involved a 64-kilometer (40-mile) stretch of the Beaufort Sea. Researchers compared the period 2002 through 2007 to average erosion rates during two previous periods.

They also documented sections of coastline that eroded more than 80 feet (24 meters) during 2007 alone.

The researchers caution that the pattern may not be representative of the overall Arctic. However, it may well forecast the future pattern of coastline erosion in the region, they said.

"This segment of coastline has historically eroded at some of the highest rates in the circum-Arctic, so the changes occurring on this open-ocean coast might not be occurring in other Arctic coastal settings," Jones said. But Arctic climate change is leading to rapid and complex environmental responses in both terrestrial and marine ecosystems in ways that will almost certainly affect the rate and pattern of coastline erosion in the Arctic, the authors write.

Interestingly, there were no westerly storm events during the summer of 2007, traditionally thought to be the drivers of coastal erosion in this region the Arctic. However, 2007 did boast the minimum arctic sea-ice extent and the warmest ocean temperatures on record.

Slipping into the sea

Jones and his coauthors verified in another recent study the disappearance of cultural and historical sites along the same stretch of the Beaufort Sea. Those sites include Esook, a turn-of-the-century trading post now buried in the sea and Kolovik (Qalluvik), an abandoned Inupiaq village site that may soon be lost.

At another site, near Lonely, Alaska, Jones snapped a picture of a wooden whaling boat that had rested on a bluff overhanging the ocean for nearly a century. A few months later the boat had washed away to sea. That study was published in the journal Arctic.

"Any increases in already rapid rates of coastal retreat will have further ramifications on Arctic landscapes — including losses in freshwater and terrestrial wildlife habitats, in subsistence grounds for local communities, and in disappearing cultural sites," he said, "as well as adversely impacting coastal villages and towns. In addition, oil test wells are threatened."