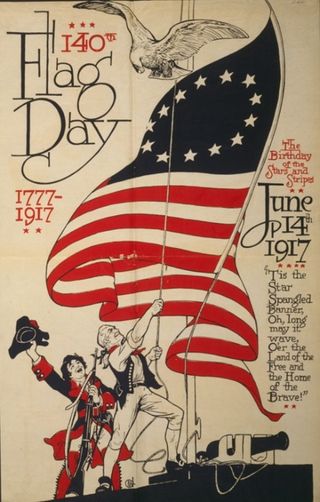 After declaring independence from Great Britain, one of the first orders of business for the freshly-seceded Thirteen Colonies was to fly a new flag. So on June 14, 1777, the Second Continental Congress passed the first Flag Act, which read:

"Resolved, That the flag of the United States be made of thirteen stripes, alternate red and white; that the union be thirteen stars, white in a blue field, representing a new Constellation."

And so was formalized the first version of our "Stars and Stripes."

But Flag Day wasn't actually celebrated until nearly a century later. The earliest reference to any sort of "Flag Day" is cited in Kansas: a Cyclopedia of State History (Standard Publishing Company, 1912), which gives credit to George Morris of Hartford, Conn. It reads:

"To George Morris of Hartford, Conn., is popularly given the credit of suggesting "Flag Day," the occasion being in honor of the adoption of the American flag on June 14, 1777. The city of Hartford observed the day in 1861, carrying out a program of a patriotic order, praying for the success of the Federal arms and the preservation of the Union."

In 1885, while working as a grade school teacher in Waubeka, Wisconsin, Cigrand held the first formal observance of Flag Day at the Stony High School. From the late 1880s forward, Cigrand traveled the country promoting patriotism and respect for the flag, pushing for an annual day of observance on June 14. In 1886 he moved to Chicago to attend dental school, and while there publicly proposed an annual observance of the birth of the United States flag in an article titled "The Fourteenth of June," published in the Chicago Argus newspaper.

Cigrand kept at it. In June 1888, he advocated for the holiday in front of the "Sons of America". The organization founded a magazine, American Standard, in order to promote reverence for American emblems; Cigrand was made editor-in-chief and further promoted the holiday.

The holiday really took off in 1894 when, on the third Saturday in June, 300,000 public school children participated in a Flag Day celebration in Chicago. The event was so successful that it was repeated the next year.

The anniversary of the Flag Resolution of 1777 was officially established by the Proclamation of President Woodrow Wilson on May 30, 1916. Flag Day was celebrated in various communities for years after Wilson's proclamation, but it was not until August 3, 1949, that President Truman signed an Act of Congress designating June 14 of each year as National Flag Day.