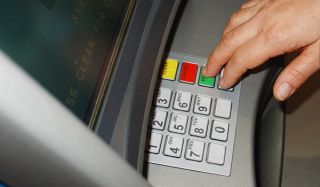 It might seem strange seeing Braille lettering dots, which blind people use to read and write, on drive-thru ATM machines, given that blind people can't drive. But federal regulations require that those letters appear on every ATM.

The Americans with Disabilities Act (ADA), which was signed into law in 1990 and amended in 2009, is a wide-reaching civil rights law that prohibits discrimination based on disability and strictly requires certain accommodations for the disabled. The Braille on buttons of all ATM machines even those located at drive-thrus are one of those accommodations.

The ADA's accessibility guidelines state that "instructions and all information for use [of an automated teller machine] shall be made accessible to and independently usable by persons with vision impairments ." According to the guidelines, all ATM buttons are required to have Braille bumps directly below the corresponding text.

Before the requirement was finalized, the American Bankers Association argued that drive-up ATMs should be exempt, because blind people can't drive. The ABA stated that the driver of the vehicle could help the blind passenger with the ATM transactions, but the Architectural and Transportation Barriers Compliance Board responded that that a driver's assistance "would not allow the [blind] individual to use the ATM independently."

Having to ask a driver to make their ATM transactions for them could also potentially compromise a blind person's privacy, since they would have to give their personal bank information or debit cards to the driver in order to complete the transaction.

And so, while it may initially seem pointless to have Braille on drive-thru ATMs, the machines actually can be and are used by blind people. A driver with a blind passenger in the back seat would just have to pull slightly ahead to allow their passenger to reach the ATM and make a transaction.