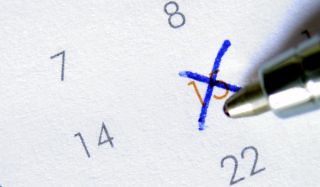 It's been said that nothing in this world is certain except death and taxes, but the day that taxes are due certainly isn't set in stone. Although we've traditionally had to have our taxes stamped and in the mail by April 15 for more than 50 years, that wasn't always the case.

When the 16th Amendment was ratified on Feb. 3, 1913, it allowed Congress to institute an income tax. Congress picked March 1 as the deadline for filing returns , and the first official tax day was March 1, 1914.

In 1955, the date was bumped forward once again, this time to April 15. The Internal Revenue Service stated that the later date allowed for government employees to "spread out the peak workload."

But there's another reason, according to Ed McCaffery, a University of Southern California law professor and tax guru. "Pushing the deadline back gives the government more time to hold on to the money," McCaffery told Fortune Magazine.

Sometimes, though, the tax deadline gets moved around for other reasons. This year the filing deadline has been pushed from April 15 to April 18 to accommodate a public holiday. Federal and state governments have also moved back deadline dates to accommodate people affected by regional natural disasters, such as huge snowstorms.