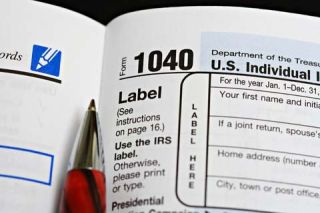 The majority of cheating comes from people who have sources of income other than an employer.

Nobody knows. But it must be a lot, because the IRS says unreported income costs the U.S. Treasury $250 billion or more a year in lost taxes.

This much is known: Most people in the United States can't cheat much because their employers report their incomes to the government. [Late? Check Out Online Tax Software]

So the big cheats are more likely to be people who have other sources of income, such as from businesses they own, rental properties or investments. Most of the cheating occurs in these areas, says David Cay Johnston, who covers tax policy for The New York Times and spoke about it in 2007 on NPR's Talk of the Nation. Some $11 billion to $30 billion of revenue in this realm goes unreported, according to differing estimates.

People who make under $25,000 a year can fudge their tax forms in favorable ways, Johnston said. And so it turns out that about half of all individual filers who get audited are in this group.

Johnston also points out another common type of cheating: Business owners have contractors do work at their homes but have them bill the company, where it's then counted as a deductable expense.

(If you are thinking of trying this trick, in which there is a clear partner to your crime, keep in mind that the IRS pays up to $5 million every year to people willing to snitch on you — like that contractor. The IRS Whistleblower Office can award a snitch between 15 percent and 30 percent of the total proceeds that the IRS collects in a case. Of course, to report a cheater, you must, drum roll please, complete Form 3949-A. Anyway, if you're caught cheating, you can face fines, jail time, and months of hell as IRS agents gleefully turn your life upside-down as they scour your records.)

So there is a lot of cheat. And what do Americans think about all this?

A Pew Research Center poll in 2006 found that 79 percent of us think it's morally wrong to not reporting all income for taxes purposes. That means a whopping 21 percent think it is either morally OK or it's not a moral issue. But that does not mean that only 21 percent of people cheat. Polls, as any pollster knows, sometimes reveal what people think, not always how they act.