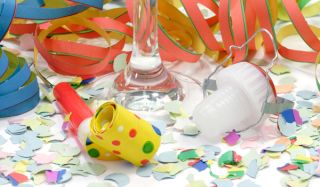 The idea of using the first day of January to mark the beginning of the new year dates back to time of Julius Caesar, five decades before the birth of Jesus.

Many calendars existed before Caesar created the Julian calendar in 46 B.C., but his marked Jan. 1 as the official start of the new year. That was the day that the two consuls, the highest elected political officials in Rome, took office to start serving their year-long terms.

Even as the Julian calendar spread in popularity, some areas continued to use dates in March and September as New Year's Day. In Medieval Europe, for example, the new-year celebration was viewed as pagan , so the holiday was moved around to more agreeable dates, including Dec. 25, the day that the Christian Church used to mark the birth of Jesus, and March 25, the Feast of the Annunciation.

During the 1570s, Pope Gregory put the Gregorian calendar into effect, restoring Jan. 1 as the first day of the new year. This change in tradition wasn't officially implemented by England until 1752. Up until then, England and the American colonies had celebrated the new year on March 25.

If America hadn't finally accepted the new calendar, we'd be raising our champagne glasses and toasting to a new year ... after Saint Patrick's Day.