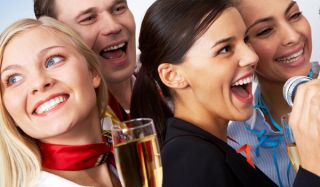 You know Auld Lang Syne as the song everyone belts out, champagne glasses raised, as the clock ticks past 12 a.m. and into Jan. 1 of the next year. But do you know what you're actually singing?

The version of Auld Lang Syne familiar to most folks began as a poem penned by the Scottish poet Robert Burns in 1788. The phrase itself was nothing new, though. Burns admitted drawing from other sources, such as an old man whom he heard singing a portion of the song, as well as a similar poem written by James Watson in 1711.

"Auld lang syne" translates directly to English as "old long times," and in many Scottish folk songs and tales it performs the same function as "Once upon a time." But it can be more loosely interpreted as "days gone by" or "old times," and so when you sing "We'll take a cup o' kindness yet, for auld lang syne," you're singing, "Let's toast to the good old times."

The poem was set to a traditional Scottish folk melody after Burns sent his manuscript to the Scottish Musical Museum, and it soon became a staple at New Year's celebrations, funerals, farewells and other group celebrations and occasions around Scotland and the rest of the British Isles. It wasn't until Jan. 1, 1929, however, that the song became a New Year's standard in the United States. That night Guy Lombardo and his orchestra sang the song at the Roosevelt Hotel in New York City. From that night until 1976, Lombardo's band performed the song in New York, from where it was broadcast live; a recording of Lombardo's rendition is still played each year during the "ball drop" at Manhattan's Times Square.

Most folks get by with singing the first phrase and chorus over and over, but Auld Lang Syne is actually much longer. Here are the full lyrics .