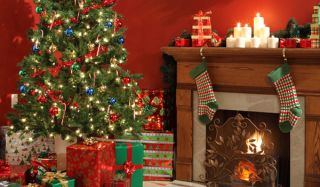 Those hanging up their stockings by the chimney with care in hopes that St. Nicholas soon would be there may not know that the tale that inspired the cheerful Christmas stockings tradition is pretty dark.

The story begins with a nobleman who lost his wife after she died from a long and painful illness. The widower was left to raise their three daughters alone, and he soon ran out of money because of some bad investments.

At the time, women without a dowry were unable to marry, and as a result may have had to enter into prostitution just to make a living. The impoverished father and his daughters were fearful of what would become of them.

A former monk named Sinter Klaus, who was also known as St. Nicholas and is the real man that Santa Claus is based on , heard of the family's plight and decided to discreetly help them.

"To save the girls from prostitution, the good Bishop Nicholas secretly left bags of gold near the chimney for them, one at a time," Donald E. Dossey wrote in his book, "Holiday Folklore, Phobias, and Fun." "The third gift of gold fell into a stocking that was hanging near the chimney to dry."

According to legend, the father of the daughters caught St. Nicholas leaving one of the gifts one night while the rest of the house slept. St. Nicholas begged him not to tell anyone, but word of the bishop's compassionate act soon spread.

The tale ends with all three daughters finding husbands, getting married and living happily ever after. In fact, they were so well off that they could afford to support their father, who lived happily ever after as well.

As for St. Nicholas, he was later anointed as the patron saint of children for his kind and generous deeds and serves as the inspiration for modern-day Saint Nick .