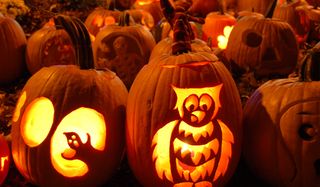 From huge and lumpy to warty and bumpy, pumpkins come in all shapes and sizes. The biggest ones are carved, lit or sometimes cooked right around Halloween.

How big was the biggest pumpkin ever?

The previous record for heaviest pumpkin was squashed this year by Chris Stevens of New Richmond, Wis., who grew a pumpkin weighing 1,810 pounds and 8 ounces (821.23 kilograms), according to the Guinness Book of World Records. The pumpkin was presented and earned its title at the Stillwater Harvest Fest in Stillwater, Minn., on Oct. 9. The pumpkin is set to be carved by Scott Cully (who carved the current largest jack-o'-lantern) on Oct. 30, at the New York Botanical Garden.

Why are big pumpkins shaped so strangely?

The larger that a pumpkin gets, the harder it becomes for it to maintain its symmetrical shape. As a mammoth pumpkin grows, it literally buckles and squashes under its own weight, flattening from its spherical shape by up to 40 percent, according to researchers at the Georgia Institute of Technology. That's why you'll rarely see a small pumpkin that resembles a floppy bean-bag chair, or a massive pumpkin that's as spherical as a tiny pumpkin.

How do giant pumpkins grow so big without breaking?

As a large pumpkin grows, its rapidly increasing weight causes certain parts of the pumpkin to grow faster than others. This gives giant pumpkins their curious shapes. Thebulbous growth allows the pumpkin to grow larger in size without forming cracks in its shell. What's the largest jack-o'-lantern?

What's the record for the most jack-o'-lanterns in a single display?

The record for most jack-o'-lanterns together was set on Oct. 21, 2006 in Boston, where 30,128 carved pumpkins were lit and displayed together at the Life is Good Pumpkin Festival, according to the Guinness Book of World Records. Part of a fundraiser for Camp Sunshine (a charity supporting children with life-threatening illnesses), the glowing display raised more than $250,000.

Why are some pumpkins covered in warts?

No, it's not a hideously disfiguring disease that's suddenly stricken one of America's favorite autumn staples those strange, warty gourds popping up in pumpkin-picking patches and farmers stands have been genetically engineered to look that way.

In fact, it takes at least 10 generations of cross-breeding to produce a pumpkin that's adequately covered in warts to be sold under the Super Freak label, according to Roy Pearman, director of sales and marketing for Siegers Seed Co., based in Holland, Mich., which "puts the genetics together" to create seeds for the bumpy, heavily wart-covered pumpkins and gourds.

How big is the world's biggest pumpkin pie?