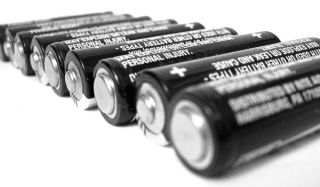 There's a reason behind that expiration date on a fresh package of batteries. Because batteries generate energy using a chemical reaction contained inside the battery cell, they use up energy, even if they haven't yet been snapped inside a remote control or toy.

Most batteries have a long shelf life that varies depending on their type and size , but they weaken over time due to the way they're constructed. Each battery contains electrodes, which are strips of metal tape coated with an oxide (a combination of oxygen and another chemical element) and rolled up like a jelly roll. Certain parts of batteries corrode over time, leaving them less effective or completely unusable.

In a recent study, scientists at Ohio State University took apart spent batteries, and used infrared thermal imaging technology to determine weaknesses in each electrode. They inspected problem spots using scanning microscopes, and found the finely-structured microscopic materials on the electrodes, which allow batteries to rapidly charge and discharge, had become corroded.

They also found the breakdown of lithium in a battery hinders the transfer of an electric charge between electrodes.

"We can clearly see that an aged sample versus an unaged sample has much lower lithium concentration in the cathode," study researcher Giorgio Rizzoni, director of the Center for Automotive Research at OSU, said in a statement. "It has essentially combined with anode material in an irreversible way."

During testing, Rizzoni and other researchers charged and discharged commercially-available batteries thousands of times over months of testing, in a variety of conditions designed to mimic how batteries are used by hybrid and all-electric vehicles. Some were tested in hot temperatures like those in Arizona, while others were tested in colder conditions that mimicked Alaskan weather.

Judging from the test results, the researchers theorize, but cannot yet prove, that the coarsening of the cathode (the "positive" end) may be behind the loss of lithium. Proving their theory correct would be a step towards manufacturers making batteries more durable and with longer lifetimes.