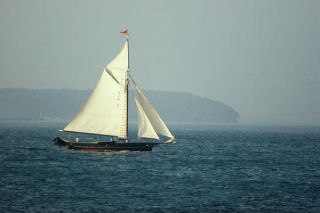 It seems intuitive that sailboats, powered only by the wind, can travel easily with the wind at their backs, but it may seem impossible that they turn around and come home again, with the wind blowing straight against them.

But this reverse movement is possible because a moving boat's sail is shaped as an airfoil like the wing of a plane. When air moves over a plane's wing, from front to back, wind flowing over the top of the wing has to travel farther than wind flowing under the wing's bottom surface. This creates a pressure difference that lifts the plane.

On a sailboat, wind blowing against the boat at an angle inflates the sail, and it forms a similar foil shape, creating a difference in pressure that pushes the sail perpendicular to the wind direction.

According to "The Physics of Sailing Explained" (Sheridan House Inc, 2003), by Kent State University physics professor Bryon D. Anderson, this force from the sail's foil shape is combined with and balanced by other forces, including those of the boat's keel (the long thin piece that juts down from the bottom of the boat).

Together, the forces of drag, from the water, and the pressure from the wind against the sail itself push the craft forward. It moves at an angle opposite the direction of the wind, called windward in sailing terminology.

According to the American Institute of Physics' Physics Today magazine, the keel is especially important because without its balancing action, a boat would simply drift downwind.

Windward sailing also does not work if a boat is pointed directly opposite the wind direction, according to The Physics of Sailing. Wind has to be moving against the boat at an angle of at least 40 degrees for most vessels. Angling too sharply into the wind causes the forces on the boat to become unbalanced, and moves the boat sideways in the water.

A sailor intending to travel windward toward a point exactly in line with the direction of the wind will have to zig zag back and forth to reach its target. Using this "tacking" technique, and traveling at an angle as close to the wind's direction as possible, sailors can reach a point in any direction, regardless of the direction of wind.