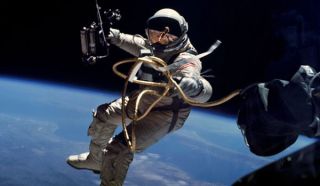 From EVAs to EMUs, spacewalks are a tricky business. Here are some frequently asked questions.

What is a spacewalk (and what's an EVA)?

When astronauts leave the protective confines of a spacecraft such as the space shuttle or International Space Station and float around in the vacuum of space, that's called a spacewalk. NASA refers to these jaunts as extravehicular activities (EVAs), because they take place outside the vehicle.

What do astronauts wear during a spacewalk?

When leaving the pressurized, air-filled environment of a spacecraft, astronauts must don protective suits to keep their bodies safe from the harshness of space. NASA astronauts wear what's called an EMU (extravehicular mobility unit), which includes a protective white suit and a strap-on pack that provides oxygen and other life support necessities. While wearing an EMU, astronauts breathe 100 percent pure oxygen, and are pressurized to about 1/3 atmospheric pressure.

The EMU suits also contain a drink bag so spacewalkers can sip water during spacewalks, which usually last between five and eight hours.

What's the purpose of a spacewalk?

Spacewalks allow astronauts to make repairs or install equipment on the outside of a spacecraft. The International Space Station , the world's largest construction in space, requires frequent spacewalks for astronauts to add additional rooms or hardware to the orbiting laboratory, or replace aging equipment.

Numerous spacewalks over the course of four servicing missions to the Hubble Space Telescope have allowed astronauts to make repairs and upgrades to the famous observatory.

Why don't spacewalkers and tools float away?

Astronauts tie themselves to the spacecraft using safety tethers to make sure they stay connected at all times. Just in case a tether breaks, astronauts also carry a system called Simplified Aid for EVA Rescue (SAFER) on their spacesuits. This system uses small jet thrusters that astronauts can control with a joystick to maneuver around in space and make their way back toward a spacecraft if necessary.

Spacewalkers also tether tools to their spacesuits so these don't float away either. Still, a number of tools have been lost to space during spacewalks including two objects lost during a Russian spacewalk conducted July 27, 2010.

How do spacewalkers train?

It's tough to train for the complicated maneuvers of a spacewalk while on the ground, because there is no way to simulate the weightlessness spacewalkers will feel. The closest NASA can get is a giant swimming pool, called the Neutral Buoyancy Laboratory, at the Johnson Space Center in Houston.

There, astronauts can swim around in a tank containing 6.2 million gallons of water. Spaceflyers wear spacesuits in the tank and practice on apparatus set up to simulate as close as possible the tasks they will have to perform during their EVA. Practice sessions often run the full, uninterrupted length of the spacewalk to help astronauts build up the endurance they will need.

This article was provided by Space.com, a sister site to Life's Little Mysteries.