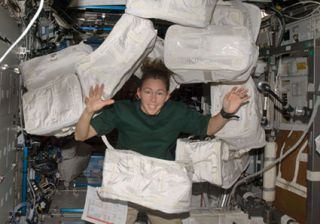 Some tasks like cooking, cleaning and working are hard enough to do on Earth. Now, just imagine trying to do all these things with no gravity to hold you (or anything else) down. This is the challenge that astronauts living aboard the International Space Station face every day.

How do you go about life without the normal tug of gravity ?

Three NASA astronauts who have spent time aboard the International Space Station (ISS) described what it is like to live, work and perform the most routine functions in space at the 2010 World Science Festival held this month in New York City.

"Life in space is very different from life on Earth," said Tracy Caldwell Dyson, a flight engineer who has been living aboard at the ISS since April.

Caldwell Dyson is currently orbiting about 220 miles (354 kilometers) above Earth in the floating laboratory, which is roughly the size of a football field , and appeared at the New York event in a taped video.

In an environment of zero gravity, seemingly simple tasks are a little more complicated. For instance, sleeping requires more than just laying down on a comfy bed. With nothing to hold them down, astronauts need to be strapped into sleeping bags in the crew quarters when they want to get some shut-eye.

"I do float, but I float inside of a sleeping bag," Caldwell Dyson explained.

At night, Caldwell Dyson lightly straps herself into a sleeping bag, which is the size of a big box that can fit a refrigerator, she said.

To eat, astronauts can choose from mostly packaged, dehydrated goods that have been brought to the space station by space shuttles or the unmanned Progress supply ships.

Typically, for longer stays at the space station, there is a 16-day, rotating menu, said Sandra Magnus, who lived aboard the ISS for 4.5 months beginning Nov. 14, 2008.

"What you end up missing is crispy and fresh," Magnus said.

Most of the dehydrated food comes from Russia, the U.S. and Japan, and Magnus quickly learned her preferences.

"Meatloaf is not so good," she said. "Desserts are pretty good, and creamed spinach is also pretty good."

Astronaut Leland Melvin, who was involved with two short-duration missions, described the proper way to brush your teeth at the space station.

"You have to spit very slowly into a washcloth," Melvin said. "Then you wet it, wait a couple hours for it to dry, and then put it in your dry trash."

For longer stays, astronauts had to be more creative in order to minimize the amount of waste they created during their stay. Magnus herself learned to cope with swallowing toothpaste.

"You only have so many washcloths," she explained. "When you live there for a while, you start to learn ways to conserve." How Do Astronauts Go To the Bathroom in Space?

Going to the bathroom also takes some getting used to, and can be tricky at first, said Magnus. There are straps to hold the astronauts in, and precision is of the utmost importance, as mistakes can not only be messy, but also embarrassing.

"As a rookie, that's not the way you want to start your mission," Magnus said.

Similarly challenging is adjusting to bathing and washing your hair in space, said Magnus.

"Water falling on your head is a beautiful thing," she stated. "Don't take that for granted."

Figuring out the best way to get water and shampoo out of their bags without splashing them everywhere took about a month for Magnus to master.

And, in their downtime, it's important for astronauts to get an adequate amount of daily exercise. Typically, space station residents need to exercise two hours per day in order to keep their bones and muscles active.

A combination of squats, stretches and cardiovascular exercises can help astronauts mitigate some of the bone and muscle loss that occurs from being in space.