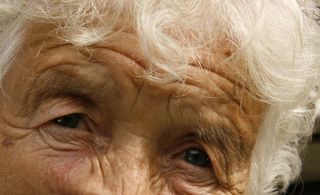 Eyelid surgery is the fourth most common surgical cosmetic procedure in America. But they might be doing it all wrong.
(Image: © Dreamstime.com)

Divorce is one of several factors now found to add years to a woman's face.

Lots of things make us old. Previous research has shown smoking causes premature aging in men and women, literally etching the aging in their faces. Other research has found that poor skin tone can add a decade to a woman's perceived age.

In the new work, researchers photographed the faces of 186 pairs of identical twins, mostly women, and asked them each a series of questions about their life habits and medical backgrounds. Four other people then reviewed all the photos and guessed the ages of each person.

Women who were divorced were judged to look nearly two years older than their siblings who were married, single or widowed, according to an article at the The Los Angeles Times web site. The research was led by Bahman Guyuron, chairman of the department of plastic surgery at University Hospitals Case Medical Center, part of Case Western Reserve University. It was reported in the journal Plastic and Reconstructive Surgery.

Only the results for women were released. Other factors that made one twin look older than a sibling:

Interestingly, being heavier made those under age 40 look older, but it made those over 40 look younger, Guyuron and colleagues report. Previous research has suggested that a little weight — particularly in the cheeks — looks good on people as they age. Predictably for a plastic surgeon, Guyuron said his findings support "fillers" used in plastic surgery.

For those who prefer to keep the looks they're given, perhaps some comfort can be found in the old adage "you're only as old as you feel." A study in December found that older people tend to feel about 13 years younger than their chronological age.