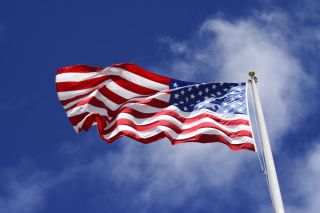 The end of the War of 1812 inspired the writing of the poem later made into the Star Spangled Banner.
(Image: © © Rael Daruszka | Dreamstime.com)

The rockets were glaring red and the bombs were bursting in air as the British relentlessly attacked Baltimore's Fort McHenry on the night of Sept. 13-14, 1814, the last year of the War of 1812. When Francis Scott Key spotted, by the dawn's early light, that his 15-starred flag was still there yet waving over the fort, he was inspired to write a poem honoring the victory. Later put to music, Key's ode was decreed the official national anthem of the United States in 1931. The actual "star-spangled banner" from Fort McHenry is at the Smithsonian National Museum of American History in Washington, D.C.