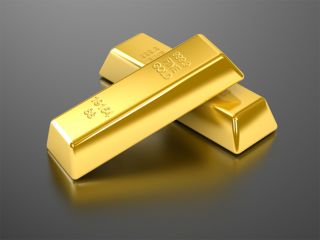 There is about $130 billion in gold in Fort Knox.

To keep up with the country’s mounting gold reserves, the United States Bullion Depository opened at the Fort Knox U.S. Army Garrison in Kentucky in 1937. The first shipment of gold arrived from Philadelphia in trains surrounded by military troops.

Fort Knox is framed in steel with walls of concrete.

Despite the defense of a 20-ton steel door, a dirty rumor in the 1970s suggested that the gold in Fort Knox was gone. To quell people’s fears, the director of the United States Mint guided congressmen and journalists through one room of the vault, and its 8-foot-tall stacks of 36,236 bars of gold.

Each bar weighs 400 troy ounces according to the U. S. Department of Treasury. One troy ounce equals about 1.1 avoirdupois ounces. The entire stockpile now weighs 147.3 million troy ounces, which is worth about $130 billion at today's prices.

The building has also safeguarded the Declaration of Independence, Lincoln’s Gettysburg address, and the Magna Carta.