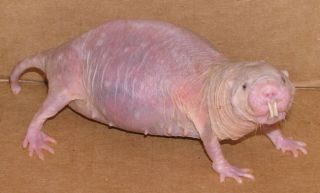 They live in the dark, but that doesn't mean they are blind.
(Image: © Rochelle Buffenstein/City College of New York.)

No. They live underground, but these hairless creatures have a keen, if limited, sense of sight.

And they don't like what they see, according to a report in the November 2006 Animal Behaviour. Light may suggest that a predator has broken into a tunnel, which could explain why subterranean diggers developed sight in the first place.