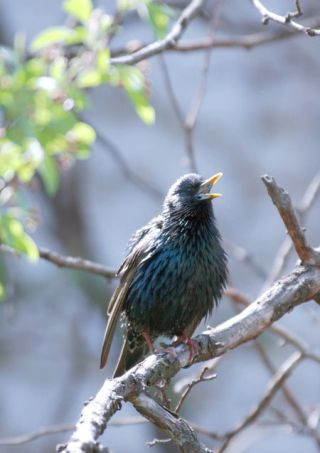 Birds are very aware of risk indicators around them, even when a human looks in their direction.
(Image: © Daniel Baleckaitis)

In humans, the eyes are said to be the ‘window to the soul’, conveying much about a person’s emotions and intentions. New research demonstrates for the first time that birds also respond to a human’s gaze.

Predators tend to look at their prey when they attack, so direct eye-gaze can predict imminent danger. Julia Carter, a graduate student at the University of Bristol, and her colleagues, set up experiments that showed starlings will keep away from their food dish if a human is looking at it. However, if the person is just as close, but their eyes are turned away, the birds resumed feeding earlier and consumed more food overall.

"This is a great example of how animals can pick up on very subtle signals and use them to their own advantage," Carter said. Her results are published online in the April 30 edition of the journal Proceedings of the Royal Society B.

Wild starlings are highly social and will quickly join others at a productive foraging patch. This leads to foraging situations that are highly competitive. An individual starling that assesses a relatively low predation risk, and responds by returning more quickly to a foraging patch (as in the study), will gain valuable feeding time before others join the patch.

Responses to obvious indicators of risk — a predator looming overhead or the fleeing of other animals — are well documented, but Carter said that a predator’s head orientation and eye-gaze direction are more subtle indicators of risk, and useful since many predators orient their head and eyes towards their prey as they attack.

This research describes the first explicit demonstration of a bird responding to a live predator’s eye-gaze direction.

"By responding to these subtle eye-gaze cues, starlings would gain a competitive advantage over individuals that are not so observant," Carter said. "This work highlights the importance of considering even very subtle signals that might be used in an animal’s decision-making process."

Do these birds understand that a human is looking at them, and that they might pose some risk?

As yet, this question has not been answered. But whether or not the responses involve some sort of theory of mind, and whether or not they are innate or acquired, the result is that starlings are able to discriminate the very subtle eye-gaze cues of a nearby live predator and adjust their anti-predator responses in a beneficial manner.