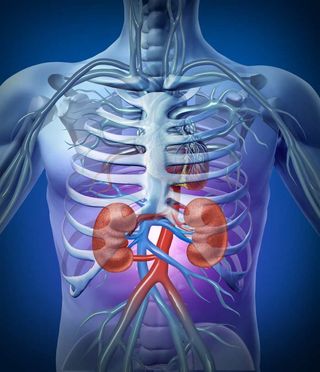 Though the trade of human organs, such as kidneys, is thriving in India, the evidence that a girl in India was killed for her organs doesn't add up, says LiveScience's Bad Science columnist.
(Image: © Lightspring | Shutterstock)

The family of a young British girl traveling in their home country of India is accusing a medical clinic of killing their daughter for her organs. Gurkiren Kaur Loyal's family said she was being treated for dehydration in Punjab when she died.

According to a news story in The Telegraph, her mother said, "Gurkiren was fine, she was chatting to us and planned to buy some gifts for her cousins. While we were talking an assistant came up carrying a prefilled syringe and reached for the tube in her hand. I asked what was the injection for, but he gave me a blank look and injected the liquid into her. ... Within a split-second Gurkiren's head flipped back, her eyes rolled in her head, and the color completely drained from her. I knew they had killed her on the spot. I knew my innocent child had been murdered."

It's not clear why the accusation of organ theft came up in this case, though apparently a family friend first raised the idea, saying it was "highly probable" that the girl had been murdered for her organs. An autopsy failed to find a specific cause of death. Several organs were removed and examined during the procedure, though they would have been long since been rendered unusable for transplant. [15 Crazy Urban Legends Debunked]

It's a bizarre, horrific story — but is it true?

Let's take a closer look at the claims. It's possible that the girl's organs were removed to cover up medical malpractice, but there are several aspects of this case that make the organ theft conspiracy claim very unlikely.

The most obvious is that if a medical clinic planned to murder the girl and take her organs, they wouldn't likely choose to murder her while her parents watched. Surely someone intent on medical homicide would have waited until late at night or another opportunity when such a killing wasn't so obvious.

Furthermore, the drug that reportedly killed Gurkiren Loyal(if indeed it did) would likely have damaged her internal organs, making them unsuitable for transplant. If you want to take a person's heart, kidney, lungs or other organs, there is no point in killing them with a method that damages those organs.

This is why Chinese prisoners have been used in the past for organ harvesting: They are shot in the head and killed without damaging the rest of the body's organs, according to a1994 Human Rights Watch/Asia report. That report documented that some condemned Chinese prisoners are killed quickly and their organs taken from them immediately after the execution.

Even if her organs had somehow escaped damage, simply from a medical standpoint, an 8-year-old's organs could not be used in an adult. Thus the conspiracy would require that another person of approximately the same age and blood type be available for immediate transplant; that person would have been waiting for weeks or months for a suitable donor like Gurkirento show up in that hospital.

The economics of the claim don't make sense, either. There are far easier and cheaper ways of obtaining human organs that don't involve killing 8-year-old girls. There is a thriving organ trade in India, and many people voluntarily sell their kidneys and other organs. The cost of a kidney in India, for example, is only a few thousand dollars. A lawsuit, not to mention the bad publicity from this case, would cost the medical clinic far more than simply buying an organ for a person in need.

Conspiracy theories and organ theft urban legends aside, the most likely explanation forGurkiren's death is that she died from a medical accident or error. Adverse — and sometimes lethal — reactions to drugs are not uncommon. Hundreds of thousands of people die each year from accidental drug overdoses, drug reactions, unknown allergies to drugs and other causes. It may have been an unavoidable accident, a simple medical mistake or something else, but the least likely answer is that Gurkiren Loyalwas murdered for her body parts.

Benjamin Radford is deputy editor of "Skeptical Inquirer" science magazine and author of six books including "The Martians Have Landed: A History of Media-Driven Panics and Hoaxes." His Web site is www.BenjaminRadford.com.