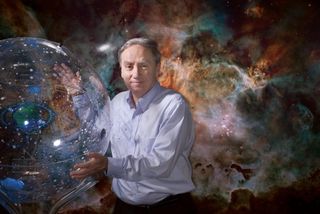 Even geniuses make mistakes, and sometimes those mistakes turn out to be genius in their own right, helping to illuminate some underlying mystery or impacting the way an entire field thinks.

In celebration of happy accidents and enlightening errors, astrophysicist Mario Livio of the Space Telescope Science Institute in Baltimore, Md., tells the stories of five great scientific mistakes in his new book "Brilliant Blunders" (Simon & Schuster, May 14, 2013). These stories serve to show how even the smartest among us can err, and that in fact to achieve a big breakthrough, big risks are necessary, which sometimes also involve big failures.

Below are Livio's choices for the most brilliant scientific blunders. [Oops! 5 Retracted Science Studies]

Charles Darwin achieved an amazing feat when he came up with his theory of natural selection in 1859.

"Darwin was an incredible genius," Livio told LiveScience. "His idea of evolution by natural selection is just mind-boggling — how he came up with something so all-encompassing as that. Plus Darwin really didn't know any mathematics so his theory is entirely non mathematical."

This feat is even more incredible given the notion of heredity (how traits are passed from parents to offspring) that Darwin and scientists of the time subscribed to would have made natural selection impossible. At the time, people thought the characteristics of the mother and the father simply get blended in the offspring just as a can of black paint and a can of white paint blend to create gray when combined.

Darwin's error was in not recognizing the conflict between this idea and his new theory. "If you introduce one black cat into a million white cats, the theory of blending heredity would just dilute the black color away completely. There's no way you would ever end up with black cats," Livio said. "Darwin didn't understand this, he really didn't catch this point."

It wasn't until the concept of Mendelian inheritance was widely accepted and understood in the early 1900s that the puzzle pieces of natural selection fell into place. Gregor Mendel proposed correctly that when traits from two parents come together, rather than blending, one or the other is expressed.

In the 19th century, Sir William Thomson, Lord Kelvin, was the first person to use physics to calculate the ages of the Earth and sun. Though he estimated these bodies were about 50 times younger than we now think they are, the calculations themselves were breakthroughs. [50 Amazing Facts About Planet Earth]

Lord Kelvin based his calculation on the idea that Earth began as a hot, molten ball, and has slowly cooled over time. He attempted to calculate how long it would have taken for our planet to get to its current temperature gradient. His numbers were off partly because scientists had not yet discovered radioactivity, so he couldn't include it in his calculation. Radioactive elements in Earth, such as uranium and thorium, are an additional source of heating inside our planet.

But Livio says this wasn't Kelvin's biggest blunder — even if he had included radioactivity, his Earth age estimate would have remained nearly the same. Rather, Kelvin made the larger mistake of ignoring the possibility that unknown mechanisms might have transported heat throughout Earth.

"He assumed that heat is transported with precisely the same efficiency throughout the entire depth of the Earth," Livio said. Even after others suggested that heat could be transported more efficiently deep inside Earth, Lord Kelvin dismissed the possibility. "Kelvin was used to being right far too many times. It was pointed out to him but he never really accepted it."

Francis Crick and James D. Watson are famous for discovering the double helix structure of DNA in 1953, but chemist Linus Pauling also proposed his own idea for the structure of DNA that same year.

"Pauling was arguably maybe even the greatest chemist to ever have been," Livio said. "He won the Nobel Prize twice, just by himself." But brilliant as he was, Pauling rushed to publish his DNA theory, which turned out to be fatally flawed. Instead of the double strands twining in a helix that scientists now know to make up molecules of DNA, Pauling theorized three intertwined strands.

In part, Livio said, Pauling was overly confident because of his previous success in deducing a structure model for proteins. "His model was built inside out compared to the correct model and had three strands inside it instead of two," Livio said. "It wasn't a double helix, it was a triple helix. He fell to a large extent victim to his own success." [Image Gallery: Francis Crick Explains DNA to 12-Year-Old]

Twentieth-century astrophysicist Fred Hoyle was one of the authors of the popular "steady state" model of the universe, which suggested the universe is in the same state as it always has been and always will be. Because scientists knew the universe is expanding, the theory required the continuous creation of new matter in the universe to keep its density and state constant.

When Hoyle learned of a conflicting theory that suggested the universe began in a single, powerful event, he dubbed it "the Big Bang," and dismissed the idea, remaining loyal to the steady state model.

"It was a beautiful principle and for about 15 years or so it was very difficult to distinguish between this model and the Big Bang model," Livio said. "So his blunder was not really in proposing this model. His blunder was that once the accumulated evidence against this model became overwhelming, he didn't accept this. He just kept trying to invent ways to keep the steady state model."

Hoyle never did relent, even while the rest of the physics community eventually came to embrace the Big Bang theory.

Albert Einstein, unquestionably one of the greatest minds in history, wasn't immune to error either. His equations describing how gravity works in his general theory of relativity, published in 1916, were a tour de force, though he did make a significant mistake.

Among the terms in the equations was one Einstein called the cosmological constant, which he introduced because he thought the universe was static. The cosmological constant achieved a static universe by counteracting the inward pull of gravity. Later, when astronomers discovered the universe is actually expanding, Einstein regretted including the constant and removed it from his equations.

Legend has it Einstein called the creation of the cosmological constant his "greatest blunder" (though Livio thinks he never actually used the term). But in fact, Einstein's real mistake was taking the constant out, Livio said.

In 1998, after Einstein's death, it was discovered that not only is the universe expanding, but this expansion is accelerating over time. To explain why that's happening, scientists have reintroduced the cosmological constant to the general relativity equations.

"His real blunder was to take it out, not to keep it in," Livio said. "The theory allowed him to put it in. We've since learned that everything the theory allows appears to be compulsory."