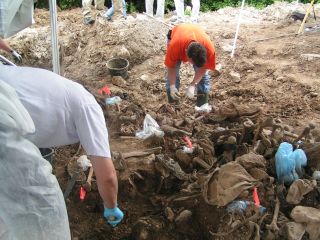 Workers examine remains at a mass grave in eastern Bosnia in 2004.
(Image: © Polargeo)

Convicting a murderer can be hard if there's no body, but new research may help authorities to better detect human remains hidden underground, in clandestine graves.

Thousands of missing people that have been tortured and killed may be buried in such secret graves, the researchers say. By simulating human graves by burying dead pigs under a variety of conditions, and then monitoring the graves using geophysical methods such as radar, researchers could improve the ability to find hidden bodies.

Finding buried bodies can be crucial to solving cases, as well as providing closure for victims' families. Pringle and his colleagues said they hope to develop better techniques not only for finding bodies, but also for determining the time of death and time of burial, among other details. [8 Grisly Archaeological Discoveries]

Pringle and his colleagues have used these techniques to study simulated clandestine graves previously. In one study, the researchers compared their ability to detect naked pigs versus ones wrapped in a plastic cloth.

Measurements of the electrical conductivity of burial site soil gave clues about the extent of decomposition. If a burial is fresh, the fluids are more conductive, Pringle said. The naked pigs were easier to detect than the ones wrapped in plastic, the study showed.

A technology called ground-penetrating radar, which lets scientists see underground, yielded clear signatures of the dead bodies. Again, the naked pigs were more easily detected than the wrapped ones.

The results of that work also showed that the signs of a hidden body vary with the soil type, and climate.

For the researchers' newest project, they plan to bury pigs in Colombia in simulated secret graves, under eight scenarios of different soil types and climates. The team will survey the graves at regular intervals over 18 months, using ground-penetrating radar, electrical conductivity probes and magnetic sensors.

Geophysical tools have proven useful in several real human cases, such as finding the so-called Disappeared people in Northern Ireland, thought to have been killed by the Irish Republican Army. Other ongoing research aims to detect mass graves from Spain's civil war.

Traditional techniques for finding dead bodies include using metal detectors, large-scale excavations, and cadaver dogs to sniff out buried bodies based on the compounds released during decomposition. The new geophysical methods are in the early stage of development.

"There's no magic wand you can waive and find something," Pringle said. "We're trying to do rigorous research in real environments to figure out what methods work best."

Pringle's colleague will present the work today (May 14) at a geophysics research meeting in Cancún, Mexico.