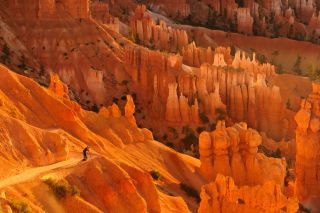 Not to be confused with the folk magic of the same name, hoodoos are the national park's trademark rock spires. Millions of years of erosion and weathering have carved the colorful limestone rock of the Claron Formation into bizarre shapes and seemingly impossibly stacked structures. The totem-pole-like hoodoos are more abundant here than anywhere else in the world.

A hoodoo is a tall, spindly structure that forms within sedimentary rock and protrudes from the bottom of an arid drainage basin or badland. Hoodoos form over millions of years of erosion in areas where a thick layer of soft rock is covered by a thin layer of hard rock. Over time, hoodoos form as a small cap of the hard layer protects a cone of softer rock underneath from erosion.

Hoodoos can be a squat 5 feet (1.5 meters) tall or soar to 150 feet (45 m). Depending on the minerals found within the different rock types, hoodoos often have lively color patterns.The hoodoos ofBryce Canyon are found in the park's horseshoe-shaped amphitheaters carved from the eastern edge of the Paunsaugunt Plateau.