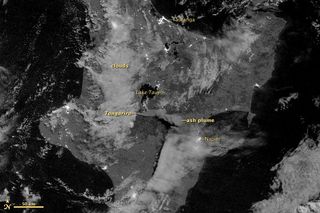 The late-night eruption of New Zealand's Mount Tongariro volcano on Monday (Aug. 6) was spotted by a NASA satellite just an hour after it began.

The eruption was a short-lived phreatic one, New Zealand volcano monitoring authorities said. hreatic eruptions are stream-driven eruptions that happen when water beneath or above the ground is heated up, potentially causing it to boil and "flash to steam," creating an explosion, according to the U.S. Geological Survey.

The volcano lies in sparsely populated part of the North Island and no injuries were reported, according to a NASA statement.

Tongariro is 6,940 feet (1,978 meters) high and is part of the so-called "Pacific Ring of Fire" region known for its seismic activity and volcanism.

The eruption of the volcano sent ash at least 20,000 feet (6,100 m) into the air, according to the New Zealand Herald. Because ash plumes can be a danger to aircraft engines, some domestic flights were halted and other flights were re-routed, NASA said.

The potential danger makes detecting these plumes important, which is where satellites like Suomi NPP can come in. The satellite's Visible Infrared Imaging Radiometer Suite (VIIRS), which acquired the new image, is able to detect ash plumes lit by moonlight — a helpful trait during a nighttime eruption. VIIRS can also detect the thermal signature of such a plume closer to its source and lower in the atmosphere that many conventional methods can.

"Such information can give forecasters a heads-up in terms of changes in ash production and low-level wind shifts that may re-direct these hazardous plumes," Steven Miller of the Cooperative Institute for Research in the Atmosphere at Colorado State University said in the NASA statement.

The eruption activity seems to have subsided for now. Steam clouds have been seen near the volcano's Te M?ri craters, where the explosion originated.

Ash samples have been collected from the area and will be tested to see whether it is old rock blasted out by the explosion or new magma, which could suggest that magma is rising beneath the volcano, according to Erik Klemetti, an assistant professor of Geosciences at Denison University in Ohio and author of Wired's Eruptions Blog. Rising magma might mean that more eruptions could occur. No lava flows occurred from the eruption, though.