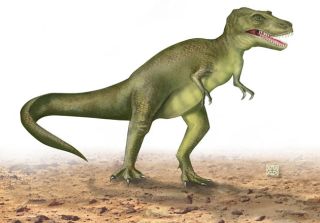 Scientists have found even more evidence that volcanism, not a space rock, may be the culprit behind the dinosaurs' demise.

The first well-supported theory for what wiped out all large dinosaurs involved a space rock that created the Chicxulub crater in Mexico’s Yucatan Peninsula. But climate change and volcanism have been suggested in recent decades, too. A set of new studies further shifts the blame away from the impact and toward volcanism, a position that geologist Gerta Keller of Princeton University has taken in recent years.

Keller and others now say more about the life-extinguishing work of a massive series of sulfur dioxide-spewing volcanic eruptions that occurred in what is now India at the time of the dinosaur-destroying K-T mass extinction (the shorthand given to the Cretaceous-Tertiary extinction).

The asteroid-impact "theory is now facing perhaps it's most serious challenge from the Deccan volcanism and perhaps the Chicxulub impact itself," Keller said today during a news conference at the annual meeting of the American Geophysical Society in San Francisco.

The K-T extinction ended the dinosaurs' reign on Earth and caused the extinction of 70 percent of life on the planet at the time.

The asteroid-impact theory was controversial when first posited in 1980 by physicist Luis Walter Alvarez, who said that such an impact could explain an unusual abundance of iridium associated with the geological boundary of the K-T extinction. Geophysicist Glen Penfield found the Chicxulub crater while searching for oil; the crater was dated to about 65 million years ago, about the time of the K-T event.

The other leading potential culprit, the colossal volcanic eruptions, occurred between 63 million and 67 million years ago. The huge volcanic explosions created the Deccan Traps lava beds in India, whose original extent may have covered as much as 580,000 square miles (1.5 million square kilometers), or more than twice the area of Texas.

Both the impact and the volcanic explosions would have spewed sulfur dioxide, dust and other emissions into the atmosphere, altering the Earth's climate. Sulfur dioxide can react in the atmosphere to form sulfate aerosols that can cool the surface of the planet and create acid rain.

Tying the dates of either of these events firmly to the dinosaurs' extinction has been tricky, with scientists continually refining their dates. Some researchers have said it may well have been a combination of events that caused the mass extinction; in that scenario, the asteroid impact is often thought of as the final nail in the coffin.

Keller and her colleagues most recently looked at the geological records in India, Texas and Mexico to help pin down when the impact and volcanism occurred in relation to the K-T event. The work was supported by the National Science Foundation.

By examining sediment layers, the team found that the crater impact appears to have occurred about 300,000 years before the K-T boundary, with virtually no effects to biota.

"There is essentially no extinction associated with the impact," Keller said.

In contrast, the main thrust of the Deccan volcanism occurred "just before the K-T boundary," said geophysicist Vincent Courtillot of the University of Paris, who also spoke at the news conference.

After the first flow, "the species disappear; we have essentially very few left," Keller said. The two subsequent flows prevented any recovery, and "by the fourth flow, the extinction is complete," Keller said.

Courtillot did work that compared the amounts of sulfur dioxide emitted by the crater impact and the Deccan volcanism and found that the volcanoes spewed out significantly more sulfur dioxide (and that the lava flows occurred over a much shorter time span than initially thought).

Based on these comparisons, Courtillot and his colleagues think that the Deccan traps are a much more likely culprit than the asteroid impact.

"If there had been no impact, we think there would have been a mass extinction anyway," Courtillot said.

"Deccan volcanism is the likely culprit behind the K-T mass extinction," Keller added, saying that she thinks the biological effects of that volcanism have been underestimated, while those of the crater impact have been overestimated.