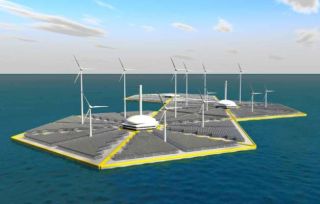 Editor's Note: "The Energy Debates" is a LiveScience series about the pros, cons, policy debates, myths and facts related to various alternative energy ideas. We invite you to join the debate by commenting directly on each article. The Facts

Most of the planet is covered by the oceans, and they absorb a staggering amount of energy from the sun each day. Ocean thermal energy conversion, or OTEC, taps into this energy to produce electricity. Ocean thermal energy conversion relies on the fact that water near the surface is heated by sunlight while seawater deep in the dark is much colder. OTEC plants use warm surface water to heat ammonia or some other fluid that boils at a low temperature. The resulting gas is used to drive turbines that produce electricity. The gas is then cooled by cold water pumped up from the ocean depths and the resulting fluid is recycled to help generate power. As OTEC relies on temperature differences, it works best in the tropics, where the surface water is hottest. As long as the temperature of surface water and the deep water differs by roughly 36 degrees Fahrenheit (20 degrees Celsius), an OTEC system can generate significant amounts of power. The idea for ocean thermal energy conversion was originally proposed in 1881 by French physicist Jacques-Arsene d'Arsonval. The first OTEC plant was later built in Cuba in 1930 and produced 22 kilowatts of power, enough to supply roughly two typical modern households. Although a handful of OTEC plants were created following the oil crisis of the 1970s, funding for them dwindled after the price of oil dropped, and none are now operating. Still, rising fuel costs have revived interest in these devices. In September the U.S. Department of Energy awarded its first grant for OTEC in years. Pros

If less than one-tenth of 1 percent of all the solar energy trapped in the oceans could be converted into electric power , it would supply more than 20 times the total electricity the United States consumes everyday, according to the National Renewable Energy Laboratory. "It could easily supply all the energy we wanted," said Terry Penney, a lab program manager at the National Renewable Energy Laboratory in Golden, Colo. "The process is very low efficiency, just 2 or 3 or 4 percent, but all that energy's free." Unlike wind and solar power, OTEC can provide constant power that utilities can depend on any time of day. The electricity it produces could also be used to drive chemical reactions that generate fuel such as hydrogen, ammonia or methanol, Penney added. It might especially benefit island communities or military outposts that rely heavily on imported fuel. Depending on how OTEC plants are set up, they could provide copious amounts of drinkable freshwater, Penney said. Also, the deep seawater that OTEC plants suck upward is naturally loaded with nutrients from all the organic matter that sunk down from the surface, which could be used to benefit aquaculture farms. "Experiments done in Hawaii showed lobsters and salmon grew much faster with this nutrient-rich water," he explained. Cons

Ocean thermal energy conversion requires a lot of money up front since the devices are massive undertakings, Penney explained. The pipes have to be wide or else the deep seawater rushes up too fast, heating up as it rubs against the sides — an intolerable consequence, since it needs to be cold. To get the cold water necessary, the pipes also have to extend down thousands of feet. Keeping the plants operating in the face of the corrosive saltwater environment and organic matter that inevitably clogs up the works could prove challenging also. "And for all that investment, you don't know if two months after you deploy it whether a tropical storm will then wipe it out," Penney said. Still, "the oil industry clearly knows how to put structures in place in the ocean and drill down to 15,000 feet. The technology is there — it could just be very costly." The environmental impact of OTEC remains murky. While nutrients in cold water from the deep could help aquaculture farms prosper, one question is whether they might also help unwanted life to grow as well. "And if you're pumping up billions of gallons from the depths, what might it change there?" Penney asked. "There's life down there too." One startling question is whether OTEC could divert the course of storms. "If you change ocean surface temperatures by even a few tenths of a degree, you could steer a storm," Penney said. What do you think?