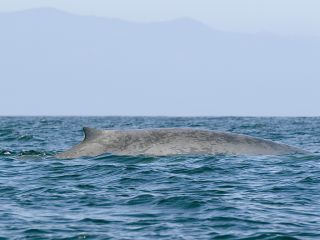 A blue whale photographed during a summer 2004 expedition to tag blue and humpback whales off the central California coast.
(Image: © Oregon State University)

To reduce the number of whales accidentally killed from ship strikes and entanglement in fishing nets, scientists are using data collected from tags placed onto more than 300 whales and combining that with information about human activities at sea to identify areas where whales and ships are most likely to intersect on the U.S. West Coast.

"We know, for example, that the West Santa Barbara Channel off California is a place where blue whales feed and it is right in the middle of shipping lanes to the Los Angeles harbor," said Oregon State University researcher Bruce Mate in a statement. "Identifying the seasonal trends, as well as the geographical movement, may help policymakers find ways to better protect the whales."

Mate has seen firsthand the results of whales' interactions with ships. In 2007 he tagged a number of blue whales off the Southern California coast during a project featured in a National Geographic Channel documentary, "Kingdom of the Blue Whale." During the three months surrounding the fieldwork, five blue whales were fatally struck by ships in the immediate area.

A number of recent net entanglements involving gray whales off California highlights the need for the tagging research, Mate and his colleagues on the project, called WhaleWatch, say.

"A first step in reducing these threats to whales is to have a better understanding of where the whales go," said project leader Helen Bailey of the University of Maryland Center for Environmental Science. "We will be analyzing the largest satellite-tracking data set for large North Pacific whales from Oregon State University and combining it with satellite-derived environmental data."

The tags can last anywhere from a few weeks to more than a year, recording details of the animals' migration routes, feeding areas, frequency of dives and other activities. The longest-lived tag made it 620 days attached to a sperm whale.

As technology has improved, so has the ability to track whales during their entire migration routes. Mate and his colleagues recently tracked a western gray whale named Varvara from Russia's Sakhalin Island all the way to the breeding grounds of Mexico — and back.